Browse the article How to Avoid a 'Hurricane Car' 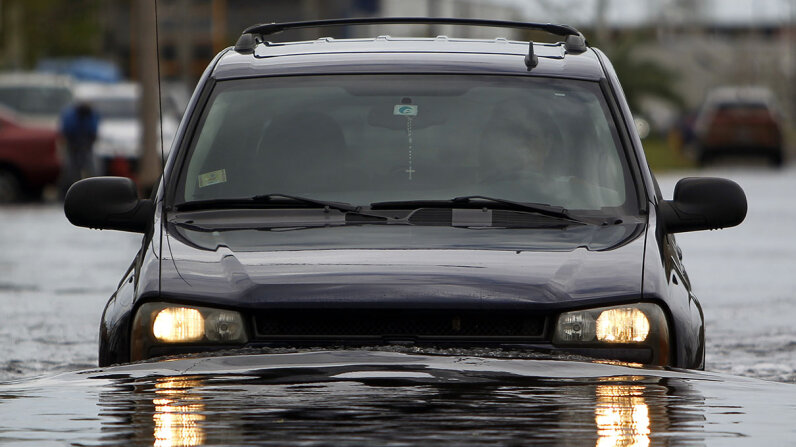 A car attempts to navigate a flooded street in the aftermath of Hurricane Maria in San Juan, Puerto Rico, on Sept. 22, 2017. RICARDO ARDUENGO/AFP/Getty Images

You've probably seen loads of images in the last few weeks of vehicles in flooded Puerto Rico, Texas and Florida streets, with water reaching up to their roofs. In fact, The New York Times reported that 270,000 claims had been filed for vehicle damage sustained during Hurricane Harvey alone, with another 70,000 filed for Irma.

In this episode of CarStuff, hosts Scott Benjamin and Ben Bowlin explain the effects of catastrophic flooding on a car, as well as how people might take advantage — or be taken advantage of — when it comes to so-called "hurricane cars."

As you're probably aware, a hurricane car isn't one that can withstand a hurricane. (Although hang tight to the end of the podcast, when Ben and Scott spitball some amazing ideas for a car that could.) Nope, hurricane cars have suffered water or damage from a storm or subsequent flooding, and are generally not salvageable for a reasonable cost. Insurance companies may send them to salvage auctions.

For cars that aren't insured, however, it's a different story. Turns out that some of them might be sold to unwitting consumers as the owners seek compensation that's normally paid out through insurance, Scott explains.

"If they're insured, they're going to be reported as flood-damaged, and the right thing is going to happen," he says. "If they're uninsured, there's a good chance that that car will be cleaned up and someone will attempt to put that car on the used car market, either here in the United States, possibly in Mexico, might go all the way down as far as Central America, even South America — it happened with Katrina." And again with Hurricane Sandy. With about 15 percent of drivers in Texas uninsured according to Consumer Reports, that's a sizable number of cars that could be hastily cleaned and sold again post Harvey.

The Mexican auto industry already is preparing for the fallout since import laws have made it possible for storm-damaged vehicles to be sold across the border. And it's not just Mexico. The National Insurance Crime Bureau reminds consumers in the United States to do their due diligence when buying a used car and to check its vehicle identification number, or VIN, to make sure it's never been declared a "total loss" from flood, for instance.

That's just one of the traps motorists could fall into as a result of hurricane and flooding. There are also warnings about companies pulling cars out of water and charging the owners absurd fees and pricing to get their cars back.

Tune in to learn more about how to avoid hurricane cars on the market in this episode of CarStuff.

Now That's Cool
When buying a used car, completing a few essential steps will go a long way toward protecting you from buying a flood-damaged car. Of course, check the vehicle history report, salvage title and the NCIB VIN Check. But also look for moisture behind the instrument panel and debris in the seat belt retractor. These two places are hard to clean out and can be damning evidence.