Can you sell a car that has been under water? 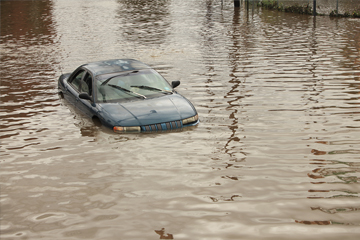 Insurance companies are quick to write off a car with water damage because the body and other metal parts eventually will start to rust.
Chris Sadowski/Getty Images

You can sell a car that's been under water — as long as you're honest about it, and the title is branded as a flood salvage. Oh, and as long as you have realistic expectations. Really, though, if your car gets damaged in a flood, take the insurance money and don't look back.

Frankly, not many people want a car that's been flooded, which is probably why you're trying to sell yours in the first place. Insurance companies are quick to total a car with water damage because the entire car is often affected. The interior will get musty and, eventually, moldy. The body and other metal parts will start to rust. If the water got inside the engine, it can sometimes be fixed — but only after it's been thoroughly dried out before being started. And even if your engine is salvageable, it's not always possible to save the drivetrain — and neither is really a do-it-yourself project [source: Car Talk].

Further, the electrical system is probably the biggest source of post-submersion trouble. This system runs throughout the entire car, so even if the water only went up to the floor, consider it a near certainty that some electrical parts got wet. Wires get damaged, connections corrode, computers short out. It's just not a good situation [source: Car Talk].

Note that we're giving a high-level overview here; really, everything needs to be looked at and replaced. And even if everything seems like it's fine when you start the car up (which is unlikely), the lingering moisture is sure to create an interesting cocktail of problems down the road. Insurance companies would rather just wash their hands of the whole thing up front than deal with a long and expensive diagnosis procedure, all the repairs, and the problems that will continue to come up throughout the rest of the car's life.

You usually have the option of buying the car back from the insurance company for its salvage value, but it'll come back with a salvage title, meaning that you're only supposed to use the car for parts. However, if you strip the car down and rebuild it (a challenging project, but not unheard of), most states will issue a rebuilt title. These branded titles will alert buyers that the car's suffered extensive damage and is not worth fair market value. You cannot try to obscure that fact during the sale [source: Gladstone].

If you own a car that's been flooded and you want to sell it, it's essential that you tell potential buyers about it up front, even if the car seems to be running well. Someone might want to buy it for parts or as a project. But if you aren't honest about the water damage, it's fraud, because you're significantly misrepresenting the car's condition. Some people go a step further and illegally alter the car's title to make it look clean. Don't be one of those people.