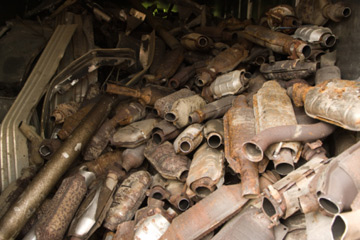 Image Gallery: Car Safety How can you tell if your car's cat is out of whack? See more car safety pictures.
Jupiterimages/Photos.com/Thinkstock

Even if you don't drive a hybrid-electric vehicle, if you own a car at all, chances are it's equipped with a very important piece of "green" equipment.

That item would be the catalytic converter -- a metal canister that scrubs polluting byproducts from your car engine's exhaust before they can escape into the atmosphere.

So how do you tell if your vehicle's catalytic converter, or "cat" as gearheads sometimes refer to it, is out of whack? And when should you count on having to replace it?

The truth is, on modern vehicles, the catalytic converter should last the life of the car or truck, given an "average" life of about 100,000 miles (160,934 kilometers). Good thing, too, because this auto part uses rare, precious and therefore expensive metals such as gold, palladium or rhodium. They act as catalysts in chemical reactions that convert air-polluting oxides of nitrogen, unburned fuel and carbon monoxide into plain old nitrogen, carbon dioxide and water.

That said, things sometimes do go wrong with catalytic converters prematurely. A sharp blow to the unit, after say, bottoming out the vehicle, could damage the catalyst material or the metal housing of the unit, blocking the flow of exhaust gases out the back (and hurting engine performance). An engine that's burning excessive oil could also wear out a catalytic converter before its time. In addition, certain fuel additives can (and do) counteract and prematurely age the catalysts.

Sometimes a car owner might smell foul odors emanating from the engine or exhaust system. Armchair technicians often blame the funk on a failing catalytic converter -- but it could be any number of things, so you're best-advised to have an authorized auto technician check it out.

There is one instance in which you will know for absolute certain that your catalytic converter needs replacing. And that is, if it gets stolen!

Yes, it's sad but true: particularly in tough economic times, thieves are fond of stealing the catalytic converters from parked vehicles to cash in on the expensive metals within. Any vehicle can fall prey, though news accounts say that high-stanced trucks and SUVs make the juiciest targets. A thief can easily slip under a truck and use a reciprocating saw or wrench to remove the catalytic converter from the exhaust system.

The relatively good news is that catalytic converters are free of moving parts and more or less maintenance free. Unlike tires, filters or brake parts, the catalytic converter on a modern vehicle should not require frequent replacement -- if at all.

For more information about catalytic converters and other related topics, follow the links on the next page.

How does engine placement affect handling?
What was NASCAR's gentleman's agreement?
Are you ready to compete in a car audio competition?