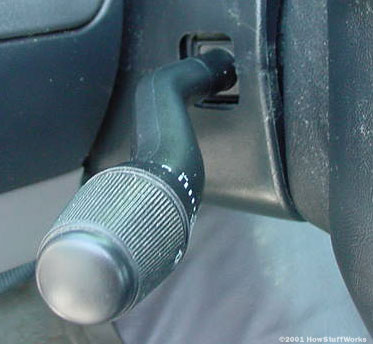 We've used it thousands of times (well, most of us have), but what makes this lever tick? See more turn signal pictures.

In the American southeast, which up until recently was comprised mainly of small towns, it's said that drivers don't use their turn signals because everyone knows where you're going anyway. Turn signals may be the most underutilized device on a car. Yet signaling is one of the most important actions you can take as a driver, warning other drivers of your impending moves to minimize hazardous surprises. You might not see a car in your blind spot, but that car's driver might see your turn signal start to blink before you move into his lane. Failing to signal may be the cause of quite a few accidents, and is probably a big source of "road rage" as well.

To most drivers, turn signals seem pretty simple: You push a lever up or down, causing your turn signals to flash. But there is actually some cool technology at work there. In this article, we'll take a look at the unusual device called a thermal flasher that makes your signals flash, and we'll learn how turn signals cancel themselves after you've made your turn.

But first, let's see how turn signals are wired. 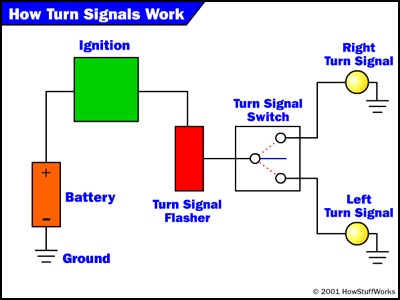 Let's take a look at how the turn-signal circuit is hooked up.

The turn-signal circuit gets power when the ignition key is on. The power goes through a fuse panel into the thermal flasher. From there it goes to the stalk on the steering column.

Depending on the position of the turn-signal stalk, the power either stops in the switch or gets sent to the left or right turn-signal lights (including the indicator lights on the dashboard). Power flows through the filament of the lights and then is grounded.

This is all fairly straightforward, but you might be a little surprised at how the thermal flasher works. 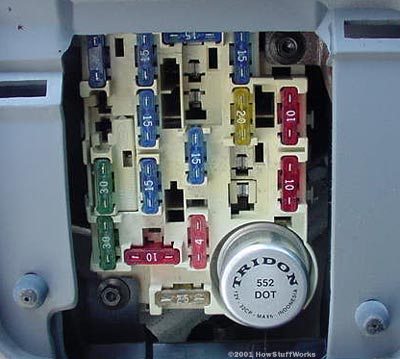 In this vehicle, the thermal flasher is located in the fuse panel.

This small, cylindrical device is sometimes located in the fuse panel under the dashboard of the car. It costs about $3 in the auto parts store and works reliably for years.

Inside the thermal flasher there are a few simple components:

Let's take a look at the mechanism that cancels the turn signal when you finish turning. 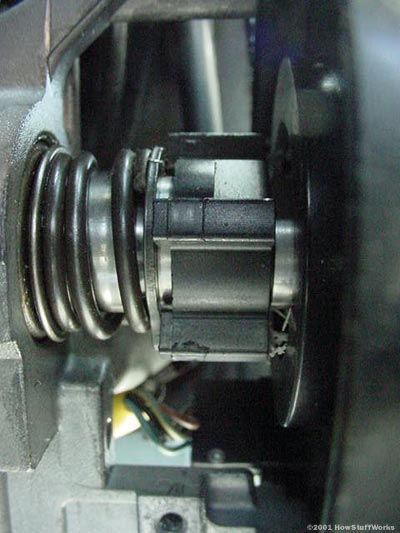 The notches turn when you turn the steering wheel.

Most cars have a mechanism that shuts off the turn signal when you are finished making a turn.

There are four notches equally spaced around the hub. When the turn signal is on, a plastic lever on the turn-signal switch is pushed into the path of these notches.

When you lift the turn-signal stalk to signal a right turn, a spring-loaded roller falls into a notch in the switch housing, holding the stalk in place. At the same time, a plastic lever thrusts out into the path of the hub.

As the hub continues to rotate clockwise, the notches hit the plastic lever, which rocks to let each notch pass. When the wheel turns back to the left, the hub turns counterclockwise, pushing the plastic lever in the other direction. This forces the spring-loaded roller out of its notch in the switch housing, so the stalk springs back to its centered position.

Next, let's take a look at a recent innovation in turn-signal technology.

From inside the car, the driver sees a dim signal.
Photo courtesy CustomVan.com

Many cars also have turn signals in their side mirrors. This is a better spot for the turn signals because if a car is in your blind spot, its driver might not be able to see the back of your car.

These mirrors contain high-intensity light-emitting diodes (LEDs), usually arranged to form an arrow that can point either left or right. The LEDs are positioned behind the mirror glass so that from inside the car, the driver sees only a dimly lit arrow, but outside the car, other drivers see a very bright arrow.

Since the lights in these mirrors are LEDs, the system has an additional benefit: LEDs light up about a fifth of a second quicker than incandescent light bulbs. That may not sound like much, but at 65 miles per hour (105 kph), your car covers 19 feet (5.8 m) in a fifth of a second. LEDs could give someone the extra time and space needed to avoid hitting you.

For more information on turn signals and related topics, check out the links on the next page.