Do Bike Helmets Save Lives? Or Do They Hurt Cycling? 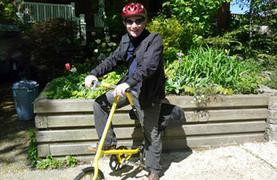 Me with my helmet on
Emma Alter

This post is part of our Better Biking feature, a discussion of many of the ways that we can engage in two-wheeled transport a little more effectively. Stay tuned for more!

First of all, I should get it out of the way and say that I always wear a helmet. Furthermore, two years ago my answer to the question of whether one should wear a helmet would have been absolutely straightforward, and wrote on TreeHugger: The Bicycle Helmet Debate is Over. Really. Wear a helmet.

You wouldn't think there would actually be any question about it, really. But in fact it is a big debate, and the issue is much more nuanced.

There is pretty strong evidence that they do. Andrew Sullivan wrote about the subject in the Atlantic:

Correctly worn, bike helmets are about 70 percent effective in preventing damage on impact. Mary Pat McKay, director of the Center for Injury Prevention and Control at the Ronald Reagan Institute of Emergency Medicine, says that with those odds, she doesn't understand why so many people continue to ride without a helmet. "If I had a magic pill to prevent 70 percent of heart attacks among people with heart disease, they

In Ontario, Canada, they studied the injuries before and after helmets became mandatory for those under 18:

"If you just look at that, then the average of deaths pre-[legislation] and average number of deaths post-[legislation], there is a significant reduction. ... And it turns out it's a 52-per-cent reduction," said Patricia Parkin, senior author of the study and director of the Paediatric Outcomes Research Team at Toronto's Hospital for Sick Children.

The New England Journal of Medicine piped in:

That looks pretty convincing. But here is the problem: Head injuries are the major cause of death for pedestrians, either hitting their heads on pavement or into the windshields when they are hit by cars. Many of the injuries to people in cars come from head injuries. So why aren't pedestrians encouraged to wear helmets? Or drivers?

Because that might make people think that cars are dangerous! Or that walking isn't safe!

Mikael at Copenhagenize making fun of me

Mikael at Copenhagenize took me to task two years ago for promoting helmet use instead of promoting cycling. He feels that the constant whine that it is dangerous to ride without a helmet encourages a "culture of fear instead of promoting a life-extending, safe, healthy form of transport that can also transform cities into more livable places."

Roger Geffen of the National Cyclists Organization in the UK put it well:

The idea that it is somehow 'dangerous' and 'irresponsible' to cycle without a helmet is a total myth. It merely puts people off cycling and contributes to the increase in the level of obesity and other inactivity-related illnesses, which kill tens of thousands of people every year. If we are to encourage people to take up cycling - with all its benefits for our health, our streets, our environment and our wallets - then we need to promote it as a safe and enjoyable way to get around for day-to-day travel, wearing normal clothes.

That is the way they think about it in the Netherlands, where they promote cycling as a safe and cars as dangerous.

Nobody wears helmets, and the death rate is extremely low.

I wear a bicycle helmet; I don't live in a city with a bike infrastructure like the Netherlands or Copenhagen. I suspect that if I lived in downtown New York, with their fabulous bike lanes, I might not. I have come to agree with Mikael and others that our energies should be devoted to getting more cyclists on the road (yet another study shows that there is safety in numbers), that we need investment in cycling infrastructure (more and better bike lanes), and more aggressive enforcement of the law against drivers who kill cyclists.