by Kate Kershner Aug 8, 2017
Haven't you always wondered what it would be like to drive one of those? Walter Hodges/Corbis/Getty Images

On a long road trip — when you're stressed about finding the right exit for the highway you need, unsure of if you should fill up before or after that mountain pass, annoyed by the narrator's voice on your audiotape — it's easy to look at the big rig chugging along beside you and think, yeah, those guys or gals must be doing something right. Truckers haul about 70 percent of America's freight, according to the American Trucking Associations, and we could learn a little something from those who bring the goods to our doors (and far distant ones).

So, on this episode of CarStuff, hosts Ben Bowlin and Scott Benjamin open the cab door to tell us a little bit more about not just the trucking industry, but what truckers could tell you about how the job works.

Scott and Ben debunk a few myths (not all truckers are abusing drugs to power through cross-country treks), but beware that passing a truck might leave you feeling permanently vulnerable after listening. After all, truckers point out that their cabs provide a perfect view into your car, and the sheer amount of "inappropriate" behavior they can observe makes pretty much any shocking sight mundane. In other words, they're so used to seeing weird stuff in cars next to them that only a rookie driver would get on the radio to gossip about it. Good news for weirdos!

And have you ever wondered why you occasionally see a rig trying to squeeze its way down a decidedly unfriendly residential or backstreet? Remember that the driver is probably more annoyed than you to be on a tight road, but, just like everyone else, they're probably at the mercy of a navigation system that gave them less-than-stellar directions. And here's something else: Some navigation systems are designed specifically for truckers.

The guys also explain why you might see a semi passing another big rig at what seems like a glacial pace. They're not just trying to take up two lanes to mess with the other drivers. The trucks have a max speed that they can achieve, and it's often quite low due to the aerodynamic functioning of the truck, the load weight and even a steep road. So a truck trying to make a pass can't always give themselves a "burst" of speed to maneuver around the other truck — even a modest incline can drop their speed, making their pass pretty sluggish.

You'll also learn about challenges that the trucking industry in general is facing. With an 81 percent turnover rate for large truck fleets, it's simply hard to find drivers who are seasoned. Scott and Ben also will tell you about what's required to be hired as a trucker, how stringent the standards are for hours worked — and why truckers aren't getting paid for the time they actually drive.

Hoist yourself up for a bird's-eye view of trucking on this episode of CarStuff.

Now That's Cool
Think semis are big? In some places, trucks tow trailers upon trailers to create a crazy long cargo rig. Find out how road trains work — and where you can find them — on this episode of CarStuff. 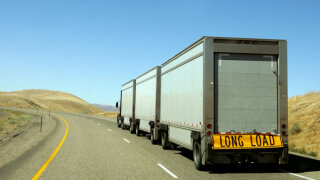 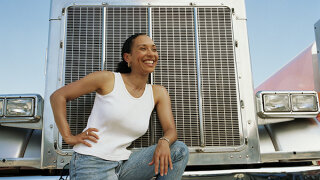 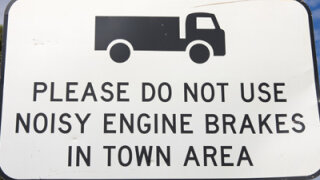