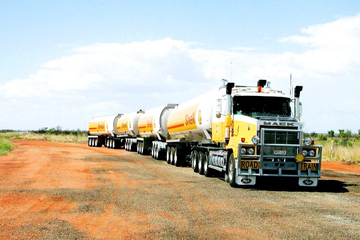 Australian Outback road trains can reach lengths of up to 175 feet (53.5 meters) -- or even longer, if they're driven on private roads.
(Creative Commons/Flickr/Werner Bayer)

If you think kangaroos are too common, and koalas are too cute (or, in truth, too cranky), have we got an Australian phenomenon for you: road trains! These are the true bad boys of the Outback, not some shirtless, croc-wrestling guy in a vest and ridiculous hat. These trucks are so bad, they're banned in most of Australia. Drivers of mere passenger cars have to know how to navigate the barren roads when they approach a road train (aka truck train) in the wild. When these oversize road trains get going, they are almost literally impossible to stop.

Australia hasn't always had massive, smoke-belching demons barreling along its desolate highways. Most of the country's cities are located along the coasts of the continent, where things are pleasant and lovely. But things like livestock, grains, fuel, ore and construction materials still have to be shipped from one region to another. Going the long way around is probably more pleasant, but that would be a terrible waste of time (and fuel) for the sake of some lovely scenery. There's no real choice but to barrel through the empty middle part of the country.

At first, this was accomplished with camels, which trained across the continent up until the 1930s, when people started using motorized caravans. Then a man named Kurt Johannson of Alice Springs -- located smack in the center of Australia -- put together the first modern road train. He used a tank retrieval tractor that the American Army had left behind during World War II. He then built some trailers to haul cattle, named the entire rig "Bertha," and unleashed the first road train on the unsuspecting Outback. 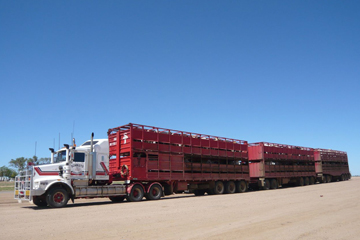 Drivers average about 21 hours at a stretch behind the wheel, though the Australian Road Train Association (ARTA) frowns heavily on this. In fact, ARTA recommend just 14 hours per day, at most.
(Creative Commons/Flickr/Mart Moppel)

Americans in particular are probably skeptical. We've all been on the highway in our little cars, and we've been boxed in between tractor trailers passing each other uphill. We've felt that gust of swirling turbulence coming off a truck as we try to pass. We've all turned our wipers on the "insane fast" setting to try to clear our windshields when the truck ahead of us is throwing spray like its confetti and we just won the World Series.

That ain't nothing compared to road trains.

In the United States, the average truck and trailer combo is about 70 to 80 feet (21.3 to 24.4 meters) long, and it weighs around 40 tons (36.3 metric tons), without any overweight or heavy load permits and whatnot. In Australia, you can attach two of these trailers to a truck, which is known as a B-double. Add a third trailer, and it's called -- you guessed it -- a B-triple. But that still isn't a road train. Those are classified as "long vehicles."

An Australian road train monster has two or three trailers connected by converter dollies, which add a couple of extra axles to the rig. This combo can be up to 164 feet (50 meters) long -- more than twice what we see on American roads. You can even attach a couple of extra trailers to a B-double setup with a converter dolly. This monster can be up to 175 feet long (53.5 meters) -- the maximum allowed on normal public roads. But there's nothing to limit the length of a truck train on private roads, like those owned by the Australian mining companies.

When these guys are loaded to the hilt, they can weigh up to 220 tons (200 metric tons). That's more than five times the weight of the semi blowing you all over the road somewhere in the middle of Iowa.

The Man Behind the Wheel

If a guy's going to spend a considerable amount of time piloting upwards of 200 tons (181.4 metric tons) along lonely roads in desolate areas of the Outback, he's going to require some things in his truck. Manufacturers like Freightliner and Kenworth, among others, make the kinds of trucks that can haul these demonically heavy loads, and they make them in a million different configurations. Along with power and safety, driver comfort is critical for these long drives. Sleeper boxes and lockers are must-haves for most road trains, and a quiet cabin that shuts out the nonstop roar of the engine and the rush of wind will save a man's sanity. Air conditioning is a necessity, too, as temperatures in Western Australia can routinely reach 120 degrees Fahrenheit (49 degrees Celsius). So that's fun.

Temperatures that hot mean the engine has to be vented and cooled within an inch of its mechanical life. Not only do cooler engines not, you know, explode in the middle of nowhere, but cooler engines also get better fuel economy. That's especially important on a route where there isn't a 7-Eleven every mile and a half (2.4 kilometers). Even if there were, it's not like pulling your 170-foot (51.8-meter) rig in for a quick fill up, cool down, and a Slurpee for the driver is going to work all that well. Speaking of exploding in the middle of nowhere, drivers may be 10-12 hours from a mechanic who knows how to fix his giant, expensive truck. Reliability becomes crucial in the Outback, where roadside assistance sometimes comes in a prop plane.

As if engine trouble weren't enough of a worry, there are two other big dangers for drivers of truck trains: their own fatigue and idiots in passenger cars. Drivers average 21 hours at a stretch behind the wheel, if you can even imagine, though the Australian Road Train Association (ARTA) frowns so heavily on this that drivers can probably feel the association's wrath, like the Eye of Sauron over the Outback, as they drive. ARTA recommends driving up to 14 hours per day, and stretching their shifts over a 14-day cycle rather than the more usual 7-day cycle.

How to Play Nice with a Road Train 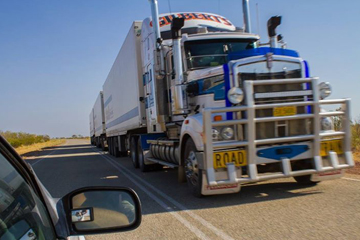 If you're approaching a road train, you need to not only stay in your own lane, but you need to stay as far left in your lane as possible. Chances are that train of trucks is using its entire lane -- and some of yours, too.
(Creative Commons/Flickr/Teddy Fotiou)

We mentioned that one of the dangers for road trains is idiot car drivers. Think of it: These are tired (or, um, wired) drivers piloting more than 400,000 pounds (181,437 kilograms) of freaked-out cows along at an average of 56 mph miles per hour (90.1 kilometers per hour) through countryside so desolate a mechanical issue has to be fixed by a guy flown in to help. That truck will not -- nay, likely cannot -- stop in time for the one car he's seen in 21 hours of driving ... one which has decided to cut him off. That car will be a pancake, like something out of a cartoon.

If you're headed to the Outback for a road trip (for some insane reason), here are a few driving tips to help you not end up looking like a cartoon pancake:

Nerds of the 1990s, keep on reading. Normal people with non-nerd interests and people born after, say 1995, you can move on to the next article.

I was assigned this roadtrain article, and the first thing I thought was Shadowrun. I know you did too, fellow nerds. I know your fingers itched for a sack full of six-sided dice and a character creation scheme so convoluted it took days to create a fully-formed, well-rounded character with a background and a future -- who would die at the hands of a low-level Go-Gang in the first session.

Oh, fine, normal people who are still reading. Shadowrun is a dystopian future role playing game, and it has road trains in America. They run only at night, and are driven by artificial intelligence systems just smart enough to pilot the five-trailer rigs in the dark. They don't use headlights, so anybody traveling after dark had to beware these inhuman truck trains. Roll to not be a pancake.