According to at least one pro, paintless dent repair sometimes takes only a few minutes [source: The Ding Guy]. Paintless dent removal approaches the damaged areas from the inside, which sounds more complicated than it really is. If you saw a bump high up near the top of a fender, it doesn't look like there's any way to access that area -- anyone who's had the hood open should be able to figure out that what you see from the inside doesn't usually correspond to what's going on outside. That is, you can't simply stick your hand in the front of the engine bay to push out a dent on the fender. There are other body panels in the way -- it's not just one thin sheet of metal that protects the inside from the outside. The same goes for the rest of the vehicle, too. For example, if you drive a hatchback or an SUV, think of the back hatch. There's always a plastic liner on the inside to help insulate the car and protect components like locking mechanisms, lights and, wiring

The pros can glance at a vehicle and know what needs to be removed to access the damaged area. And they know how to do it quickly, without costly accidents like breaking a trim panel. If you have to visit a shop for your paintless dent repair, chances are your technician has access to every tool known to man, but even a mobile technician should be pretty well equipped. Your tech will select the proper assortment of tools from the arsenal -- sized and shaped to access behind the dent and apply the proper amount and shape of pressure. Often, the tech will simultaneously hold other tools against the dent on the outside surface. This helps the dent from being pushed too far in the opposite direction. It can also help the technician gauge the location of the inside tool, since he can't really see what he's doing and he's going by feel alone. Within a short amount of time, the dented area should be gently restored to its original appearance. But remember that the metal is still damaged -- another incident in the exact same area is likely to be much worse than the first since the metal is now less able to resist impact. This is a quickie aesthetic fix, not a full restoration.

That's good enough for most people, so that's partially why paintless dent removal is a relatively inexpensive procedure. Painting a car at a halfway decent body shop, with proper preparation, tends to be a really pricey endeavor. Highly skilled labor doesn't come cheap and quality paint is like liquid cash.

A pro is also better at assessing if a dent is a good candidate for the procedure. If the metal is deeply creased or if the damage resembles a puncture (even if the metal is not actually penetrated) the procedure won't be as successful because the metal has been damaged beyond repair -- at least, beyond what paintless dent repair can fix, anyway. And, of course, if the paint's integrity has been destroyed ... well, you're simply out of luck. 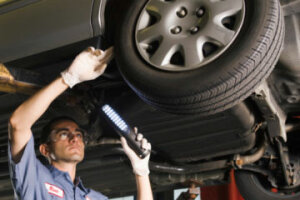