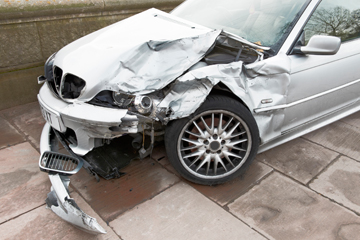 A professional can determine if a small dent or ding is a good candidate for the paintless dent removal procedure.
(Peter Dazeley/Getty Images)

As far as body damage goes, shallow dents are really no big deal. They affect the outermost layer of the car only and their negative repercussions are mostly aesthetic. That is, of course, assuming the impact was soft enough that the paint remained intact -- and that's the assumption we'll be working with for the rest of this article. If your car's paint was chipped or cracked as a result of whatever unfortunate incident occurred, it's not a candidate for paintless dent removal. (Paint repairs are a lot more involved, and can become much worse if the exposed metal is not fixed quickly.) It's not unusual to get dents that don't damage the paint surface, because modern automotive paints are formulated to be extremely hard and resilient [source: Allen].

Like most car repairs, you have two options: Bust out your toolbox or hire a pro. This job will require special tools, although they aren't expensive. At least at first, that is ... and assuming you use them right. But if you're the type who regularly dings up the family car or has bad luck with stray shopping carts in parking lots, learning to perform paintless dent removal might be worth the investment in time and money. Maybe you'll even find out you've got "the magic touch" with sheet metal.

Who knows? Maybe you'll get so good you can moonlight as a mobile paintless dent removal technician, showing off your newly-flawless ride to prospective customers. That's right -- a lot of paintless dent removal pros will come right to your door and perform their metal magic in your very own driveway. That's awfully tempting, isn't it? Avoiding the stress and hassle of taking your car to the body shop. But if it's so simple that a pro can do it with portable equipment, right out in the open ... well, surely it can't be that difficult for you, a first-timer, right?

As you'll see, making the right decision about hiring a pro to do the job or tackling this one yourself can depend on several factors. Don't start hammering away at your dented hood and fenders just yet.

According to at least one pro, paintless dent repair sometimes takes only a few minutes [source: The Ding Guy]. Paintless dent removal approaches the damaged areas from the inside, which sounds more complicated than it really is. If you saw a bump high up near the top of a fender, it doesn't look like there's any way to access that area -- anyone who's had the hood open should be able to figure out that what you see from the inside doesn't usually correspond to what's going on outside. That is, you can't simply stick your hand in the front of the engine bay to push out a dent on the fender. There are other body panels in the way -- it's not just one thin sheet of metal that protects the inside from the outside. The same goes for the rest of the vehicle, too. For example, if you drive a hatchback or an SUV, think of the back hatch. There's always a plastic liner on the inside to help insulate the car and protect components like locking mechanisms, lights and, wiring

The pros can glance at a vehicle and know what needs to be removed to access the damaged area. And they know how to do it quickly, without costly accidents like breaking a trim panel. If you have to visit a shop for your paintless dent repair, chances are your technician has access to every tool known to man, but even a mobile technician should be pretty well equipped. Your tech will select the proper assortment of tools from the arsenal -- sized and shaped to access behind the dent and apply the proper amount and shape of pressure. Often, the tech will simultaneously hold other tools against the dent on the outside surface. This helps the dent from being pushed too far in the opposite direction. It can also help the technician gauge the location of the inside tool, since he can't really see what he's doing and he's going by feel alone. Within a short amount of time, the dented area should be gently restored to its original appearance. But remember that the metal is still damaged -- another incident in the exact same area is likely to be much worse than the first since the metal is now less able to resist impact. This is a quickie aesthetic fix, not a full restoration.

That's good enough for most people, so that's partially why paintless dent removal is a relatively inexpensive procedure. Painting a car at a halfway decent body shop, with proper preparation, tends to be a really pricey endeavor. Highly skilled labor doesn't come cheap and quality paint is like liquid cash.

A pro is also better at assessing if a dent is a good candidate for the procedure. If the metal is deeply creased or if the damage resembles a puncture (even if the metal is not actually penetrated) the procedure won't be as successful because the metal has been damaged beyond repair -- at least, beyond what paintless dent repair can fix, anyway. And, of course, if the paint's integrity has been destroyed ... well, you're simply out of luck. 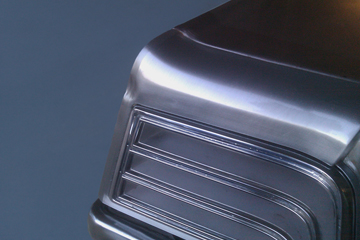 It sure looks like a simple repair, doesn't it? But do you have the do-it-yourself skills to finish the job properly or should you just hire a pro?
(Photo by Scott C. Benjamin)

The pros would probably cheekily subtitle this page, "The Do-it-yourself Approach." And it's true, while there are a lot of ways to attempt paintless dent repair on your own, and even though the various kits and tools look fairly simple, it's not nearly as easy as the infomercials would have you believe.

First, you have to pick a proper tool kit. And that's not easy for a user who has little clue what's going on. Some of them are cheap -- low prices should raise red flags. Others are so expensive (three-figures or more) that they're probably right up there with the cost of a decent professional repair (although, to be fair, if you buy the kit you can perform multiple repairs).

Many of the high-end, expensive tools are intended to be used along the inside of the panel, much like a pro would do. (Gaining access to the inside of body panels can be a chore, though, and often involves careful removal of multiple interior trim pieces.) Alternatives (which tend to be the less expensive kits) flaunt the conventional wisdom that small dents should be massaged back out from behind the painted surface. These options instruct the user to glue a tool to the dented surface and then twist or pull on the tool to pop it out. True, you can go buy the same tools as a pro, but it takes a lot of skill and experience to use them properly.

So, we've explained what the procedure looks like -- assuming it was done properly. And as you could probably guess there are a lot of ways an amateur or first-timer can get it wrong. It's different than most other car repairs because it's not about mechanical prowess; it's more about control and the ability to maintain a steady hand and a gentle pace. You can't rush it. The problem is, once a sheet metal repair starts to go awry, you're usually much, much worse off than if you'd just left it alone. Metal holds its shape, but only to a certain point.

Let's say you get a dent in the hood -- nothing too drastic, just a shallow, even dent with no sharp creases in an area that's pretty easy to reach. You think it'll be easy to pop it out on your own, so you begin to massage the underside while holding your shaping tool in place. You've made good progress so far, and a casual observer wouldn't even notice the flawed area. But it's not exactly perfect, and since it's been fairly easy to this point, you decide to keep massaging the area to make it flawless. After a few more minutes of massaging, you realize that you've pushed it just a little too far. And now you've got this flabby area on the hood where you stretched out the metal. And there's no easy way to shrink it back down. Keep going and it'll stretch even more. Lesson learned.

A good paintless dent repair might look perfect, or close to it,but the metal underneath that shiny paint is still damaged. It's thinned out and its structure has been weakened. But as long as the paint is still there and it's not immediately obvious, that's probably good enough. After all, it's not a safety concern or anything. Just remember: Sometimes it really pays to hire a pro.

To DIY or not to DIY? I've never tried to use an at-home paintless dent removal kit to bang one out myself; however, I have owned a car that I had completely repainted because paintless dent removal wasn't an option. And it's a pain in the butt. And it's expensive. And I've also made some bad calls in terms of judging what I can handle myself ... and what I'd just make worse. That said, I've never bought a product from an infomercial to attempt a car repair.

In other words, this article certainly isn't intended to serve as advice for whether or not you should attempt to repair dings and dents in your own garage. I'd normally suggest practicing a new procedure ... just try it out on a piece of scrap sheet metal first, of course.