Browse the article How Mufflers Work 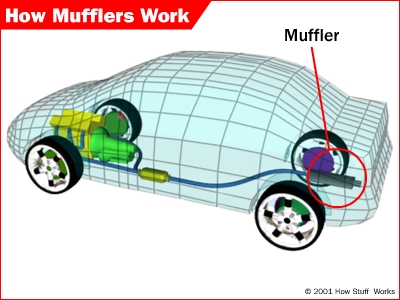 Mufflers cancel out most of an engine's noise.

­If you've ever heard a car engine running without a muffler, you know what a huge difference a muffler can make to the noise level. Inside a muffler, you'll find a deceptively simple set of tubes with some holes in them. These tubes and chambers are actuall­y as finely tuned as a musical instrument. They are designed to reflect the sound waves produced by the engine in such a way that they partially cancel themselves out.

Mufflers use some pretty neat technology to cancel out the noise. In this article, we'll take a look inside a real car muffler and learn about the principles that make it work.

But first, we need to know a little about sound.

Where Does the Sound Come From?

Sound is a pressure wave formed from pulses of alternating high and low air pressure. These pulses makes their way through the air at -- you guessed it -- the speed of sound.

In an engine, pulses are created when an exhaust valve opens and a burst of high-pressure gas suddenly enters the exhaust system. The molecules in this gas collide with the lower-pressure molecules in the pipe, causing them to stack up on each other. They in turn stack up on the molecules a little further down the pipe, leaving an area of low pressure behind. In this way, the sound wave makes its way down the pipe much faster than the actual gases do.

When these pressure pulses reach your ear, the eardrum vibrates back and forth. Your brain interprets this motion as sound. Two main characteristics of the wave determine how we perceive the sound:

It turns out that it is possible to add two or more sound waves together and get less sound. Let's see how.

How Can You Cancel Out Sound?

Now comes the cool part: It is possible to produce a sound wave that is exactly the opposite of another wave. This is the basis for those noise-canceling headphones you may have seen. Take a look at the figure below. The wave on top and the second wave are both pure tones. If the two waves are in phase, they add up to a wave with the same frequency but twice the amplitude. This is called constructive interference. But, if they are exactly out of phase, they add up to zero. This is called destructive interference. At the time when the first wave is at its maximum pressure, the second wave is at its minimum. If both of these waves hit your ear drum at the same time, you would not hear anything because the two waves always add up to zero.

How sound waves add and subtract

In the next section, we'll see how the muffler is designed to create waves that cause as much destructive interference as possible. 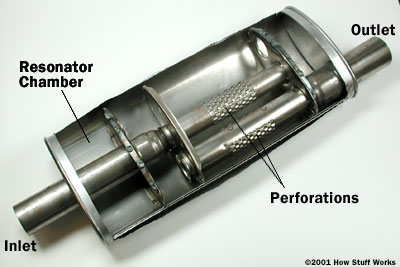 Located inside the muffler is a set of tubes. These tubes are designed to create reflected waves that interfere with each other or cancel each other out. Take a look at the inside of this muffler:

The exhaust gases and the sound waves enter through the center tube. They bounce off the back wall of the muffler and are reflected through a hole into the main body of the muffler. They pass through a set of holes into another chamber, where they turn and go out the last pipe and leave the muffler.

A chamber called a resonator is connected to the first chamber by a hole. The resonator contains a specific volume of air and has a specific length that is calculated to produce a wave that cancels out a certain frequency of sound. How does this happen? Let's take a closer look ...

When a wave hits the hole, part of it continues into the chamber and part of it is reflected. The wave travels through the chamber, hits the back wall of the muffler and bounces back out of the hole. The length of this chamber is calculated so that this wave leaves the resonator chamber just after the next wave reflects off the outside of the chamber. Ideally, the high-pressure part of the wave that came from the chamber will line up with the low-pressure part of the wave that was reflected off the outside of the chamber wall, and the two waves will cancel each other out.

The animation below shows how the resonator works in a simplified muffler.

Waves canceling inside a simplified muffler

Some cars, especially luxury cars where quiet operation is a key feature, have another component in the exhaust that looks like a muffler, but is called a resonator. This device works just like the resonator chamber in the muffler -- the dimensions are calculated so that the waves reflected by the resonator help cancel out certain frequencies of sound in the exhaust.

There are other features inside this muffler that help it reduce the sound level in different ways. The body of the muffler is constructed in three layers: Two thin layers of metal with a thicker, slightly insulated layer between them. This allows the body of the muffler to absorb some of the pressure pulses. Also, the inlet and outlet pipes going into the main chamber are perforated with holes. This allows thousands of tiny pressure pulses to bounce around in the main chamber, canceling each other out to some extent in addition to being absorbed by the muffler's housing.

Backpressure and Other Types of Mufflers 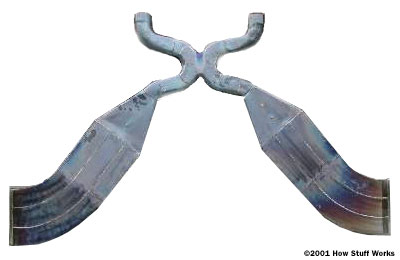 The exhaust from a NASCAR race car: There are no mufflers here, because reducing backpressure is the name of the game.

One important characteristic of mufflers is how much backpressure they produce. Because of all of the turns and holes the exhaust has to go through, mufflers like those in the previous section produce a fairly high backpressure. This subtracts a little from the power of the engine.

There are other types of mufflers that can reduce backpressure. One type, sometimes called a glass pack or a cherry bomb, uses only absorption to reduce the sound. On a muffler like this, the exhaust goes straight through a pipe that is perforated with holes. Surrounding this pipe is a layer of glass insulation that absorbs some of the pressure pulses. A steel housing surrounds the insulation.

These mufflers produce much less restriction, but don't reduce the sound level as much as conventional mufflers.

There have been a few experiments with active noise-canceling mufflers, especially on industrial generators. These systems incorporate a set of microphones and a speaker.

For more information on mufflers, sound and related topics, check out the links on the next page.