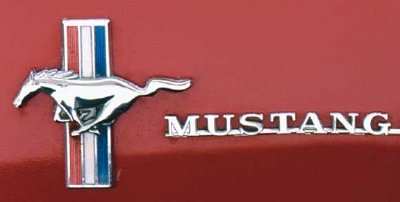 Mustang's running-horse logo captured the energy of the young Baby Boom generation that Iacocca knew would embrace the car.

Lee Iacocca introduced the 1965 Ford Mustang to a throng of reporters at the New York World's Fair on April 13, 1964. He trumpeted the new car's design and price, and outlined the coming advertising campaign. He then went on to explain just why the Mustang was such a revolutionary vehicle. We rejoin Iacocca's remarks as he describes the changing needs of the car-buying public, and how the Mustang fits in:

The secret lies in its remarkable versatility. For a modest price it can be an economical compact car with traditional Ford quality and all the flair of a high-priced, highly styled European road car. For a little less-modest price, customers can buy high performance to match the flair. The Mustang straddles price brackets in a way that will enable buyers to position it depending on their individual needs, wants, and pocketbooks.

From the outset, compact-car customers have wanted bucket seats, deluxe trim packages, high-performance engines, four-on-the-floor stick shifts, and just about every other option we could devise. [They] wanted basic economical compacts, to be sure. But they also wanted to be able to dress them up to suit their own individual tastes. The compact-car market reflected the flavor of youth -- young Americans out to have a good time.

By next year, 40 percent of the U.S. population will be under 20 years of age, and the 16-24 group is growing faster than any other segment. Not only are there more young people, they are settling down at an earlier age, marrying, and having families.

We designed the Mustang with young America in mind. We like to think that in the process we have achieved a new dimension in American motoring -- perhaps in world motoring. We believe we have succeeded in wrapping up -- in one package -- all the elements of what we call "total performance." Best of all, we offer the package at a modest price.

You know, it's easy to design a car with a spacious interior if you are willing to sacrifice exterior flair. And it's also easy to design a car with a racy, sporty exterior if you're willing to throw out a couple of seats or give up most of your trunk space. The trick is finding the right combination of roominess and high style -- and that's exactly what we think we've accomplished with our new line of cars. Ladies and gentlemen -- the Mustang!