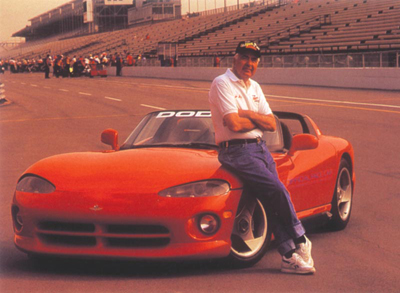 It began one day in February 1988 with a brief discussion between Chrysler President Robert A. Lutz and Tom Gale, chief of design.

"I was walking down the hall, Bob called me in the office -- and it was just a five-minute discussion," said Gale. "I can remember it like it was yesterday. He said,'I've been thinking more and more. We really ought to kick off doing a project like a reborn Cobra.' That was our intent right from the very beginning."

What Lutz had in mind was a sports car with a modern engine management system, new-think transmission, computer-aided suspension design, and world-class tires. The Viper would take advantage of the latest in modern technology. But it would not be a gadget-laden, high-tech wonder bristling with turbochargers, anti-lock brakes, four-wheel steering, adjustable shock-absorber damping, and all-wheel drive. Instead, the Viper would take a mechanically pure approach -- loads of power fed to simple rear drive. Brute force. As in the Shelby Cobra, there would exist an unfiltered communication between driver, car, and road.

However casual the pair's conversation may have been on the surface, several influences came together during those five minutes. One was centered around a concept vehicle designed by Chrysler's Pacifica design studio. The stylists had been exploring the packaging of a V-8 convertible sports car. Around 1985, the idea came together and a static concept vehicle called the Izod was produced.

Another influence was a late-'80s engine development program. Lutz was one of the executives overseeing the truck division at Chrysler during this time and he craved a new stump-puller gasoline engine that would boost Dodge's image with big-pickup buyers.

A man who would prove vital to Viper, Francois Castaing, was at that time head of Chrysler's Jeep and Truck Engineering division. He had come over in July 1987, after a career in European motorsports, where he helped turbocharge Formula 1 as technical director of Renault's Formula 1 effort.

"One of the first major projects we got going was to put a new big V-10, a big gas truck engine, on its way," Castaing recalled. "Jokingly, we said, 'That's the kind of engine that back in the '60s, Bizzarrini and DeTomaso would have bought to create the great sports car of back then. You know, very powerful, torquey, big gas American engine, put into a nice body.' And we kept saying, 'Well, maybe we should sell the engine to people like that.' Bob [Lutz] owns a Cobra, so Cobra was another car we talked about. One day -- and I don't remember how it happened -- but the idea of creating a concept car like the Cobra, using the big gas truck engine as a core, came up."

"It occurred to me," Lutz explained, "that Chrysler had all the bits and pieces in the parts bin. Whether it's the truck bin or the car bin, who cares? But we had all the pieces in the bin to do a show car that would pick up on the theme of the Cobra."

Using the brash Cobra as a touchstone brought to the forefront another irreplaceable influence: Carroll Shelby. Shelby had hooked up with Chrysler as a "performance consultant" in 1982, and by 1986, Shelby Automobiles Inc. was turning out hot, limited-edition Dodges. Shelby said that at the time Lutz approached him, he was in fact building a sports car of his own and trying to interest Chrysler in it. But along came Lutz and Castaing. Shelby recalled Lutz's proposal: "'Why don't we build a sports car, something like the old 427 Cobra, only let's build a 1990s version of it -- and what did I think of the idea?' We sat down about 30 minutes and conceptualized the car. He wanted to do what I'd been trying to get done around the company for nine years. In 30 minutes we had the concept . . . . And we ended up with the Viper, where it might have been years before we would have gotten management to agree to build what I was building."

Around that time Shelby was awaiting a heart transplant and therefore didn't have a direct hand in Viper's engineering or design. But the fathers of the Viper regard him as the "conscience" of the car, a voice that kept it true to the ethic of power and simplicity.

Just three weeks after Gale and Lutz had their five-minute talk, Gale was in Lutz's office discussing another topic. As their meeting was breaking up, Gale brought up the Viper project: "I said, 'I've got something else I want to run by you.' By then what we had was a few sketches, a full-size side view package, and a rendering of what we wanted to do with the car. And I said, 'This goes back to the discussion we had a few weeks ago, and I wanted to see what you think of it.' And he was really excited. I think more than anything, though, he was frankly surprised that we just took off and started to go."

These renderings were the product of Chrysler's Highland Park Advanced Design department. They show an open two-seater with a voluptuously wide body and the classic sports car long-nose, short-deck proportions. The trailing edges of the front fenders were open in the manner of race-car air extractors. The windshield was low and swept, with rearview mirrors that were integrated at its edges. A targa-type roll bar supported the head restraints. Full wheel openings stretched over enormous tires on rims with canyon-deep offsets.

In just three weeks, these drawings were transformed into a full-size clay model. Lutz approved, and on May 28, 1988, construction began on a two-seat sports-car concept for the 1989 auto-show circuit.

The show car's steel body was remarkably similar to the form that had been established in ink and clay, but the show car added an even more intimidating touch. Most of the original drawings showed exhaust tips exiting the lower rear fascia, and the clay model had coves below the doors that hinted at exhaust outlets. However, the show car did more than hint: Mushrooming from the caverns behind its front wheels were snake pits of exhaust headers. They gathered in the rocker panels and muscled under the doors as bona fide side exhausts, thick and threatening.

The Viper RT/10 has all-independent suspension, but no anti-lock brakes or driver-side air bag.
Chrysler LLC

"I was a little shocked when I saw the first Viper workout," Lutz said. "It was to me more of a departure from the Cobra styling themes that I had personally envisaged. I would have done a more literal update of the Cobra. Obviously, you know, with a rnuch faster windshield, but I probably would have had a tendency to keep the Cobra mouth and everything -- which would have been wrong. Because then it would have been merely a restyle of the Cobra, whereas the Viper now is a totally unique car which is reminiscent in character of what a Cobra was. But it now stands unique, as opposed to being 'son of Cobra.'"

Development of the Dodge Viper

An automobile this impressive deserved something equally distinctive beneath the hood. And that was the V-10.

"We packaged the car around the V-10," Gale said. "One of the great justifications for this program was, 'Hey, why don't we take one of those engines and try just really making something special out of it, something that would really showcase what we had done.' The big question was, could we get a V-10 ? I couldn't get my hands on one. So when we built the concept car, we took a 360 (cubic-inch V-8) and literally grafted on the front two cylinders and made a running engine . . . So that's how those get done . . . lots of sweat and lots of good hard work behind the scenes." There would, of course, be more development work on the engine, but from the original concept the V-10 was linked to the Viper.

A name would be the final touch.

"I think I came up with it on an airplane trip," Lutz said. "What it was is, you wanted the snake and we couldn't have 'Cobra.' It was as simple as that. You didn't want 'Sidewinder' because it had military connotations and, secondly, you could see all kinds of buff-book headlines with the car going sideways. 'Asp' doesn't sound too good. 'Python' -- they're big and fat and they swallow pigs and then lie around in the sun for a week. So 'Viper' seemed to be . . . It rolls off of the tongue easily. And the only resistance we got to Viper was some of the marketing guys, with the show car, wanted to call it Dodge Challenger, I think."

Viper debuted at the 1989 Detroit Auto Show, and was a smash hit.
Chrysler LLC

Painted a gleaming red, the Dodge Viper RT/10 debuted on January 4, 1989, at the North American International Auto Show in Detroit. It was a sensation.

Showgoers crowded 12-deep to get a glimpse. It was the feature story in enthusiast magazines. Photos of it appeared in daily newspapers. Chrysler received hundreds of letters from the public, begging that Viper be put into production. Some admirers even sent deposit checks -- which were returned. Lutz was quoted as saying a high-ranking friend at Ford had contacted him about obtaining one. It was a brilliant, satisfying moment.

"And now we're together at the show, and the car is really attracting a lot of attention," recalled Castaing. "And I remember we were all together being photographed on the display -- Carroll Shelby, Bob, and myself. And I remember us saying, Now that everybody wants the car, what are we going to do to make one?"

A week after the Detroit unveiling, Chrysler Corporation Chairman Lee Iacocca said his company would decide Viper's fate in the second quarter of 1990. On May 18, 1990, Chrysler announced that it would build the Viper for sale in limited numbers.

The story was only beginning. 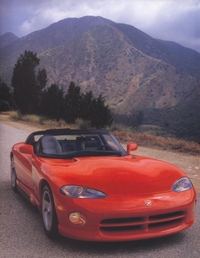