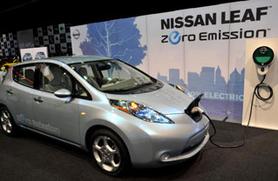 If the Nissan LEAF, and other electric cars, are going to become mainstream, the industry will need to overcome more than a few challenges.
©Getty Images

This post, part of a series we're running all about electric cars, was written by Jamie Page Deaton from HowStuffWorks.com.

It's tough to get a new business off the ground. It's even tougher when you're trying to launch a new industry based on a new product that could alter the ways millions of people get around. Just ask any electric car maker.

The major challenge is costs. Battery technology is expensive, and because batteries in electric cars need to be able to hold massive amounts of charge to make the cars practical for most drivers, they have to be built using expensive materials, most of which are tough to procure. Because electric cars cost a lot to build, they also cost more than comparable gasoline cars to buy. That makes consumers reluctant to adopt them. It's a free-range-chicken-and-organic-egg problem. Electric cars could be less expensive if electric car makers could ramp up production volume and use economies of scale. But, for that to happen, lots of consumers need to buy electric cars -- something that likely won't happen without prices coming down.

Beyond the costs, electric car makers have a lot of convincing to do with consumers. Not everyone is sold on the idea that electric cars make sense for their life. That's because of range anxiety. Electric car makers are finding that people are worried about how far they can travel in electric cars before their batteries peter out. In a gasoline-powered car, running low on gas is really no big deal; just pull into a gas station, fill up and in about five minutes you're back on the road. Charging and electric car isn't quite so simple. Most production electric cars about to hit the market can only go about 100 miles (160.9 kilometers) on a single charge. And, unless you have access to a specialized charging station (which are currently in short supply), getting a full charge takes around eight hours. While most people drive less than 40 miles (64.4 kilometers) a day and could easily charge their electric cars overnight, electric cars still aren't useful for road trips. And, let's say you drive 80 miles (128.7 kilometers) in a day, come home and find out that there's an unexpected emergency and you need to drive another 30 miles (48.3 kilometers)? Consumers thinking of situations like that make for a big hurdle that electric cars still have to clear.