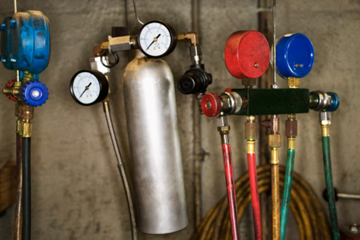 The answer to that last one is definitely no; recharging the AC is not a scam. It simply means that fresh refrigerant is added to the system. If the refrigerant is a bit low, it can be topped off, the same as if you were a bit low on oil in the engine. If it's really low, though, whatever refrigerant is still in the system needs to be drained out and replaced. This process of clearing out the system and adding new fluid is called recharging.

In either case, you've lost some refrigerant, which isn't so great. Even though R-134a is better for the environment than Freon, the Environmental Protection Agency would rather not have any air conditioning refrigerant leaking into the soil and rivers. If you're going to have the system drained and recharged, the EPA recommends having the technician take a look at the system to find the source of the leak and fix it. They don't require the repair, but they'd really, really like you to have it done.

This article has talked a lot about R-134a as a replacement for big, bad Freon, but there are others that have been approved by the EPA, too. R-134a has the distinction of being the refrigerant most tested and recommended by manufacturers, but there are others with names like Free Zone, Freeze 12, and Kar Kool that the EPA will allow in automotive air conditioning systems [source: EPA].