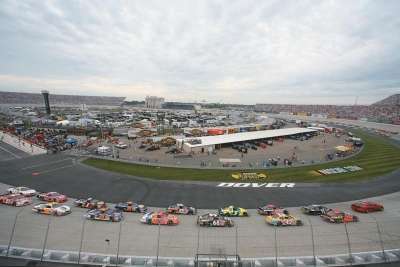 Dover International Speedway is paved with concrete, a surface that is tough on cars.

Dover International Speedway, measuring exactly one mile, is considered neither a short track (which is generally defined as being less than one mile in length) nor a superspeedway (which must be more than a mile). Unlike most modern tracks, the racing surface is made of concrete rather than asphalt. Dover is known to be hard on cars, thus earning it the nickname "The Monster Mile."

Dover International Speedway parking: Lots are free except for Sunday races ($10). Infield parking is allowed on Sundays only; gates are open 4:30-11:30 a.m. There is a $40 fee for every vehicle and $40 for each person older than 12. RV lots are located south and east of the track near Old Leipsic Road.

Dover International Speedway first aid: An infield care station is located by the south grandstand. Other stations are at the south end of Old Leipsic Road, between Gates 7 and 8; the corner of Persimmon Tree Lane and Pit Stop Road near Lot 9; and outside the west side of the North Tent Village, across from Gate 15.