The Right Body for the Track 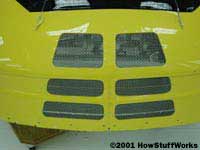 The goal in designing a short-track car is to create as much downforce as possible. Downforce is an aerodynamic force that tends to press the cars tightly against the ground, allowing the tires to grip the track with more force. This makes the cars go around the tighter turns as quickly as possible. Downforce comes with the penalty of increased drag, but on the short tracks, reducing drag is not so important because the engines are able to make their full power output (they are not limited by restrictor plates) and speeds are generally lower.

Extensive testing is done in a wind tunnel to optimize the body design for maximum downforce. The body is mounted as far back on the frame as possible -- about 5 inches (12.7 cm) back from the body location on a super-speedway car. This helps the car create extra downforce.

The front fenders on short-track cars are much more pronounced and curved, which also helps to produce downforce.

Since the speeds are lower on the short tracks, getting an adequate volume of cooling air to the engine and brakes can be a challenge -- especially since the engines and brakes generate more heat during short-track racing. The grill opening on the front of a short-track car is larger than on a super-speedway car, and extra vents duct air directly onto the brakes.

On the super-speedways, the track is much longer and straighter and the banking is high, allowing cars to maintain a high speed all the way around the track. The goal in building a car for super-speedway tracks is to reduce drag as much as possible. These tracks require the use of restrictor plates that reduce engine power from about 750 horsepower (hp) to 450 hp.

Since the engine is not producing its full power, it is critical to make the best use of the power available by reducing drag. The body on a super-speedway car is mounted forward on the frame to reduce drag. The sides and the fenders are less contoured, and the grill opening is carefully tested in a wind tunnel to find the smallest-sized opening that will provide the necessary cooling airflow.

This device is placed behind the grill during wind-tunnel testing to determine the speed of the air entering the engine compartment.

At the higher speeds of a super-speedway track, there is enough airflow for cooling the brakes, and a much smaller grill opening can provide adequate cooling for the engine.