How do you make a wastegate adjustment on a turbocharger? 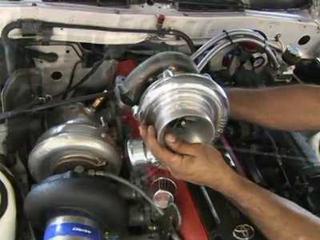 Turbo chargers are great for boosting your car engine’s horsepower. Turbochargers are able to compress roughly double the amount of air as a regular engine, so that more fuel can be burned, and as a result, the car can accelerate and move faster. The only problem is that when you press down on the accelerator, there’s a lag before the turbine picks up speed, and then suddenly the car lurches forward.

One solution is to reduce the weight of the rotating parts. This way, the turbine and compressor can accelerate faster. A large turbocharger has a heavy turbine and a weighty compressor. Both take time to rev up. A small-sized turbocharger can give your car a power boost quickly, at lower engine speeds. But what happens when your car speeds up and needs yet another boost? You step on the gas and lots of air enters the engine, which could potentially cause the small turbocharger to spin like crazy. This is why most automotive turbochargers are installed with a handy little valve, called a wastegate. The wastegate responds to the boost in pressure. If the pressure is too high, this often indicates that the turbine is spinning too quickly. The wastegate fixes the problem by channeling some of the exhaust around the turbine blades in order to slow the turbine down.

Meet Japan's Secret Street-racing Gang: The Mid Night Club
Why is it so hard to understand the NASCAR penalty system?
How NASCAR Pre-race and Post-race Inspection Works