by Jamie Page Deaton
Next 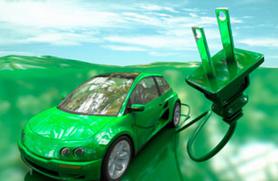 Doing a little math with go a long way to figuring out how cheap it can be to run an electric car.
Colin Anderson/Getty Images

This post, part of a series we're running all about electric cars, was written by Jamie Page Deaton from HowStuffWorks.com.

So you've done everything you can think of: You've checked your tire pressure, carpooled, telecommuted -- maybe you even bought a hybrid. But you can't shake that nagging feeling that you're car is still polluting the atmosphere more than you'd like. And, let's face it: that troublesome feeling is hard to shake at the sight of all those nasty emissions spewing from your car's tailpipe.

The best solution for emissions remorse is to do away with your car's tailpipe altogether. With several affordable and practical electric cars hitting the U.S. market in the next two years, it's going to be easier for everyday consumers to get charged up and hit the road. But, there are more benefits to switching to an electric car than just cutting tailpipe emissions. Best of all, those benefits will likely end up in your wallet. While electric cars will cost more up front than their gasoline-powered compatriots, in the long run, they may be cheaper to operate.

The biggest savings will be in fuel. A gallon of regular gas today costs an average of $2.70, according to the U.S. Energy Information Administration (EIA). Residential electricity costs on the other hand, only average $.11 per kilowatt hour (again, according to the EIA). Nissan says a full charge of their Nissan Leaf electric car will cost $2.75.

Most electric cars also let you save by choosing when they charge. You can set the Versa, as well as plug-in hybrids from Ford and other automakers, to charge only during off-peak hours, bringing down your electricity costs. And, though an in-home charging station for the Leaf costs about $2,000, the EPA estimates that a Nissan Versa will cost $1,359 per year in gas. So, in a little over 18 months, the savings on the Leaf should pay for the charging system.

These numbers don't take into account insurance and maintenance costs, but the costs of running an electric car electric car -- just getting the energy required to move it down the road -- looks a lot lower than the cost to run a conventional car.