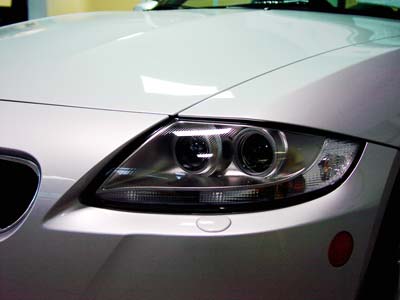 Most adaptive headlights systems also include a self-leveling system. Self-leveling headlights have an additional level sensor that determines if the car is tilted forward or back. For example, if a car is driving over a large bump, when the front of the car hits the bump, it lifts up. Standard headlights would briefly point up into the sky until the rear of the car moved over the bump and the car returned to a level position. You may have noticed this if a car driving behind you at night passed over a bump, such as a railroad crossing. The other car's headlights would flash briefly, as if the driver had blinked his or her high beams at you. This is actually the car's headlights temporarily pointing up and into your eyes instead of down at the road. With a self-leveling system, electric servomotors react to the level sensor and keep the headlights aimed down at the road, no matter the position of the car.

Self-leveling headlights are already required on new cars in Europe, and they're required on all U.S. cars equipped with bi-xenon headlights. Bi-xenon lights are so bright that they would blind other drivers if they didn't level themselves.

Headlights of the Future

Auto designers are developing several innovations in headlight technology that should appear on production models in the next few years. Adaptive brake lights will allow you to see more than just the car in front of you applying the brakes. You'll also know how hard the driver is applying the brakes, giving you a good indication of trouble ahead or how much you yourself need to slow down. These brake systems will light up like normal brake lights under normal braking conditions. However, when someone presses on the brakes hard to make a more sudden stop, the brake lights shine more brightly. The lighting is progressive -- when someone really stomps on the brakes, the very brightest brake light comes on, while lesser degrees of braking force result in brightness in between "normal" and "full stop."

Single-source fiber-optic lights could revolutionize auto lighting by allowing for a wider variety of lighting options and optimal lighting configurations. A single-source system uses one light located somewhere in the inner workings of the car. Fiber-optic strands then carry the light to wherever it's needed. Instead of two headlights, a car could have a wide light-emitting pattern on the front. The fiber optics could be manipulated by small motors to allow even more versatile adaptive lighting. The drawback for the time being is that the fiber optics lose a lot of the light's intensity as they carry it, so a very bright single-source is needed [source: Smart Motorist].

For more information on adaptive headlights and other topics you might be interested in, check out the links below.