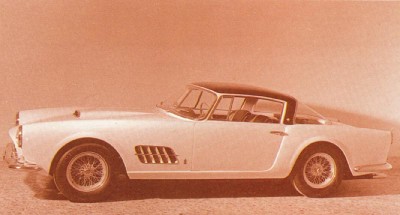 Typical of the first series 410 Superamericas is this two-tone 1956 coupe on a 110.2-inch wheelbase.

In January, a complete 1956 Ferrari 410 Superamerica was shown at the Brussels Auto Salon. Bodied by Pinin Farina, it maintained a family resemblance to the smaller 250 GT Ferrari, another Farina design that would be built by Boano and Ellena through 1958.

The main visual difference between the two cars could be seen in the side vents on the front fender flanks of the 410: a rounded trapezoidal shape with four vertical bars within the opening and one horizontal bar starting ahead of the opening and continuing past the vent at the back. And unlike the 250, the 410 body sported slightly flared wheel openings.

Inside, an aluminum-spoked steering wheel with laminated wood rim was typical of contemporary Ferraris. The instruments sat directly in front of the driver, an 8,000-rpm tachometer to the left, a 300-kilometer-per-hour speedometer to the right. Each of them measured almost six inches in diameter, with easy-to-read white numbers on black faces.

Between them was a three-way dial containing fuel level, water temperature, and oil pressure gauges, and a small clock could be found in the center of the dashboard. Full leather trim covered the seats and door panels, and carpeting covered the floor and transmission/driveshaft tunnel, as well as the trunk floor.

The 410 Superamerica faced no direct competition. Visually, it wasn't that much different from a 250 GT, and neither were driver or passenger amenities, but its performance and price put it into a world all its own.

The 1956 Ferrari 410 Superamerica had the advantage of being suitable for distance driving.

Even at that price, the 410 certainly didn't overshadow the 250 GT in acceleration, handling, or braking. The real difference came in the way the performance of the larger V-12 was delivered: slower-revving with high-torque output at low rpm, making the 410 more suitable for cross-country and slower in-town driving than its higher-revving siblings.

That, Chinetti felt, would appeal to the more affluent and often older American driver who might want to indulge himself in an exotic Italian car but wasn't quite ready to meet the demands of a low-torque, high-revving engine. With its eight-inch-longer wheelbase, the overall size of the initial 410 also seemed better suited to the American market in 1956.

Though it's considered ponderous and truck-like by many Ferrari enthusiasts, the Superamerica still had its Ferrari pedigree. It was built for long-distance touring and could cover vast expanses with exceptional ease.

During the first year of 410 production (the word "production" being used rather loosely here) -- between late 1955 and late 1956 -- only about 14 cars were built. Nine or 10 of them were similar to the car shown at Brussels in early 1956, but each had minor differences.

For more on the 1956 Ferrari Superamerica body, see the next page.