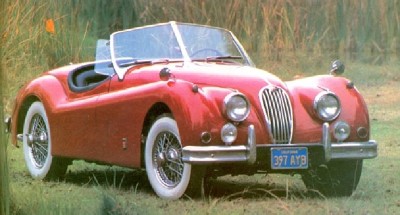 A lush wooded setting is perfect for this XK-140 roadster, though this is an American model and scene. See more classic car pictures.

Milestones by almost any standard, the sleek and speedy Jaguar XK sports cars, the XK-120 and its XK-140 and XK-150 descendants, have long been recognized as among the most romantic sports cars ever built.

When the doors at Earls Court opened for the annual London Motor Show in October 1948, car-starved Britons virtually besieged the Jaguar stand. The reason: the all-new XK-120. Easily the star of the show, it was the slinkiest, sexiest, most modern sports car ever seen on the Sceptred Isle.

With curvaceous flush-fender bodywork and a smooth, powerful new twincam six, it marked a complete design departure from prewar British practice, yet many enthusiasts viewed it as the direct successor to the lithe and lovely SS100 of 1937-1940. It was equally a bold symbol of Britain's postwar industrial recovery, and would prove to have wide appeal on both sides of the Atlantic. In this country, it would be as important as the MG TC in fueling the sports car fever that ultimately led to a raft of domestic two-seaters, the Chevrolet Corvette and Ford's Thunderbird in particular.

For these and other reasons, the XK-120 and its XK-140 and XK-150 descendants have long been acknowledged as among the most romantic and influential sports cars ever built. Needless to say, they've been highly sought after collectible automobiles almost from the day the last of the breed gave way to another trend-setting Jaguar, the sensuous E-type.

As a marque, Jaguar was but a kitten in 1948, though it wasn't exactly a newcomer even then. Its origins go back to 1921, when William Lyons and William Walmsley established Swallow Coachbuilding Company, Ltd. in Blackpool to produce motorcycle sidecars. The firm entered the automotive arena in 1927 with a line of open and closed sports bodies designed for popular high-volume chassis from makers like Austin, Morris, and Standard. After moving to Coventry the following year, the company began building complete cars in 1932. The first was designated SS I (for "Swallow Sidecars"), a close-coupled long-hood coupe powered by a 2.1-liter side-valve Standard six and built on a specially fabricated under-slung chassis that gave it a distinctive ground-hugging stance.

This car and a smaller-displacement companion dubbed SS II sold surprisingly well for a new British make in the Depression, and by 1934 the company felt justified in changing its name to SS Cars, Ltd. Larger and more powerful models followed in quick succession. Included was the first car to bear the name Jaguar, a handsome sporting sedan appearing in 1936 with a 2.7-liter overhead-valve Standard-built six massaged by Harry Weslake and W. M. Heynes to deliver 104 horsepower.

But the pinnacle was undoubtedly the SS 100, a lean and lissome roadster introduced in 1937. Originally offered with a 2.5-liter ohv six, it was joined the next year by a 3.5-liter model with the same classic styling, plus 125 horsepower and genuine 100-mph performance. Although known for its tricky handling, the 100 proved nearly unbeatable in local rallies and hillclimbs, a tribute to its robust construction.

SS Cars continued to build sidecars during World War II and also served as a repair depot and parts fabricator under contract to the British air force. While repeated German bombing raids during the Blitz reduced much of Coventry to rubble, SS Cars was comparatively lucky: its facilities suffered only a single direct enemy hit for the duration, though it did considerable damage. Thus, the firm was able to resume civilian production after V-E Day without undue delay, even if it was only on a limited scale.

Of course, no company could hope to do business in postwar Europe with a name like "SS," so Lyons decided to rid his firm of any association with Hitler's despised storm troopers by adopting a new title, Jaguar Cars, Ltd., in February 1945. Car production through mid-1948 was confined to slightly updated versions of the large 2.5- and 3.5-liter sedans from the late prewar years, though the SS 100 was theoretically available as the "Jaguar 100," according to the catalog. That a car as stunningly different as the XK-120 could have appeared so soon after the war -- and from a small company that was down if not out -- is nothing short of amazing.

Go to the next page to learn more about the Jaguar XK-120.