Are we on the brink of the flying car? 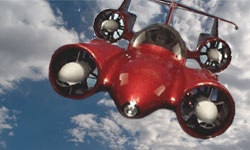 For 50 years, science fiction has been tantalizing us with visions of airborne roadways and quickly maneuvering, sports-car-like flying cars. And for 50 years, companies have been chasing the dream, releasing the occasional prototype to keep their investors investing. But in February 2007, an Israeli company named Urban Aeronautics made a bold projection: A flying car on the market by 2012.

The Urban Aeronautics X-Hawk and its smaller cousin, Mule, have a very specific, guiding application: urban rescue. By all accounts, the concept is right-on. Where helicopters fail, X-Hawk plans to succeed. Its designers claim it can press right up against a building to rescue people stranded on top floors and hover there, in contact with the structure, maintaining stability. Its technology, while patented, is similar to the innovations employed in vertical take-off and landing (VTOL) craft marketed as "personal air vehicles" -- i.e. flying cars -- like Trek Aerospace's Dragonfly and Moller International's Skycar.

In essence, the X-Hawk is a helicopter without the massive, exposed rotor and without the need to roll in order to move left and right. These two advances alone make it an ideal urban rescue vehicle, able to maneuver in tight spaces that would prevent useful helicopter access. Helicopters have a hard time getting close to enough to buildings and mountains to be of much use when it comes to snagging people from high places. The technology behind X-Hawk's advances in maneuverability include several major upgrades over previous flying-car attempts:

However, as of February 2007, X-Hawk has hovered just 3 feet (1 meter) above the ground. Urban Aeronautics expects it to reach full operability by 2009. X-Hawk's smaller version, Mule, is predicted to hit the skies commercially in just five years (the full-size X-Hawk's projected market date is later, around 2015). If Mule is indeed making rescues as early as 2012, it could be the proof-of-concept that opens the doors to other VTOLs still in the development stage but this close to marketability. And we've heard this all before; but this time, a major aircraft producer is interested. While still contemplating a real commitment to the project, Bell Helicopters is in talks with Urban Aeronautics and displayed the X-Hawk prototype at the 2006 Farnborough air show. Price will, of course, be an obstacle to mass consumption. Urban Aeronautics estimates that the small version of the X-Hawk, with a three-person capacity, will run approximately $1.5 million. But for an urban rescue vehicle marketed to the military and police forces, that's really not half bad.