Willys in the 1950s: Bought by Kaiser, Giving Up on Cars 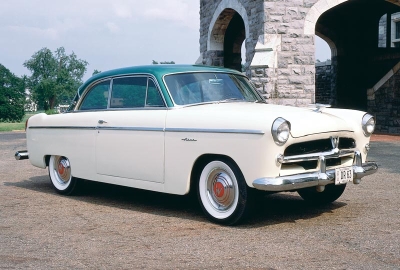 The 1954 Aero-Eagle was an economical hardtop coupe, but the model would not last long following Willys' takeover by Kaiser.

Offerings expanded for 1953, when appearance changed only in detail -- notably red hubcap emblems and a gold-plated "W" in the grille, honoring Willys' 50th anniversary. About 500 Aero-Larks were built for export with the old F-head fours, but engines were otherwise unchanged. Aero-Wing was retitled Aero-Falcon, and a new four-door sedan arrived in Lark, Falcon and Ace versions. The hardtop Eagle was again rather pricey, though up only $2 from '52. Helped by the end of govern­ment-mandated curbs on consumer production instituted because of the Korean War, Willys had another modestly good year, selling about 42,000 cars.

The situation changed in 1954, when Willys-Overland was purchased by Henry Kaiser, who combined it with ailing Kaiser-Frazer to form Kaiser-Willys Sales Corporation. K-F sold its sprawling Willow Run, Michigan, plant to General Motors (which would use it into the 1990s), and Kaiser production was transferred to Toledo.

The Kaiser takeover didn't immediately affect the '54 Aero-Willys, which was little more than a '53 with larger taillights and revised interior. But March 1954 brought a raft of changes. Chief among them was Kaiser's 226-cid L-head six, which was shoehorned in as optional power for Ace and Eagle. There were also new Ace and Eagle Customs, basically the standard articles with a "continental" spare tire.

Though heavier than the Willys 161, the Kaiser 226 engine produced a useful 25 extra horsepower that made the Aero relatively fast. Top speed was little higher at 85 mph, but the big six dropped typical 0-60 mph times to around 14 seconds. As an experiment, a few Aeros were fitted with 140-bhp supercharged Kaiser Manhattan engines, which made the lighter Willys a performance match for many contemporary V-8 cars -- or so company engineers claimed.

All '54s handled much better than earlier Aeros, thanks to a revised front suspension. In all, the best Aeros yet failed to convince many customers, and production dropped to 11,717.

By early 1955, Kaiser-Willys decided to abandon the U.S. car market. No longer called Aero, the '55s comprised Custom two-and four-door sedans and a Bermuda hardtop (formerly called Eagle); Willys also built 659 Ace four-doors, again for export. Engine choices did not change save for deletion of the Lark's 134-cid four, but prices were drastically cut in a last-ditch effort to attract sales. The Bermuda, for instance, was slashed to $1895, and was thus honestly advertised as America's lowest-priced hardtop.

Sales considerations also prompted an ambitious '55 facelift by Kaiser stylists Buzz Grisinger and Herb Weissinger. The restyles' main elements were a busy two-tier grille (replacing the simple horizontal-bar motif of prior years) and Z-line side moldings that made for an odd two-toned appearance. In the meantime, a neat hardtop wagon was in the works for 1955-56, and designers "Dutch" Darrin and Duncan McRae were conjuring more ambitious restyles for the years beyond. But Willys wouldn't live to see them, at least not with passenger cars. So after a final 5986 units, most carrying the 226 engine, Willys returned to making nothing but Jeeps.

Happily, the Aero would live a good while longer in South America, where Kaiser's Willys do (of) Brasil subsidiary took over the Aero dies and offered a cleaned-up '55 with F-head Willys power during 1960-62. Designer Brooks Stevens then applied handsome new square-rigged outer panels, and the car continued through '72, first as the Aero-Willys 2600, then the Willys Itamaraty, and finally the Ford Itamaraty (Dearborn acquired Willys do Brasil via American Motors in 1967). That's eloquent testimony to the sound basic design of the original Aero-Willys. A pity it wasn't more appreciated in its native land.