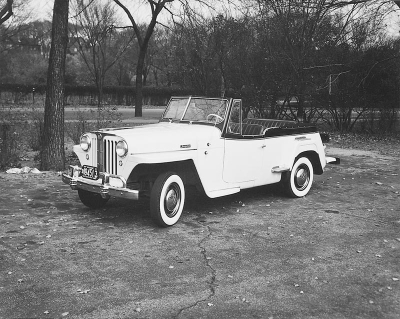 1948 marked the arrival of Willys' Jeepster, which incorporated elements of the company's successful military Jeep into a civilian touring vehicle.

Willys had started building military Jeeps by now, so its 1942 model year was even shorter than for most other U.S. auto­makers. That year's Series 442 Americars were the same as the '41s save a prominent vertical grille bar (carrying a line down from the hood trim) and slightly higher prices. Just under 29,000 of the '41 and '42 models combined were built before W-O shifted entirely to war production. Frazer would leave Toledo in 1943, ultimately to take over Graham-Paige. Taking over as W-O president was Charles E. Sorensen, the famed former production boss at Ford. "Cast-Iron Charlie" then stepped aside in 1946 for James D. Mooney.

Willys postponed returning to passenger cars, resuming peacetime production with Jeep-based vehicles instead. These included the inevitable civilian version of the military Jeep, plus two hybrids. The first was a station wagon introduced in 1946 and destined to live on for 20 years. Though usually considered a truck and not a car, it arguably qualifies as the first modern all-steel wagon. In any case, it was W-O's main civilian product through 1947.

More directly automotive was the Jeepster, a jaunty open tourer designed during the war by Brooks Stevens, who also did the wagon. Announced in 1948, the Jeepster offered seating for four on the 104-inch wagon wheelbase, plus a manual soft top and clip-in side curtains. Initial power was provided by the "Go-Devil" four. A six with 148.5 cid and 72 bhp was added for 1949. Both engines were converted from L-head to F-head configuration during 1950. F-heads had side exhaust valves with overhead intake valves for better breathing and increased power. That year's Jeepsters sported an eggcrate grille (replacing vertical slats), somewhat less-deluxe appointments, and a six enlarged to 161 cid and 75 bhp.

Priced in the $1400-$1800 range, the Jeepster was relatively popular for such a specialized product. First-year sales were strong at 10,326. But this evidently satisfied demand, for 1949 production was just 2960. The 1950 figure was a healthier 5844, but some were unsold at year's end and registered as '51 models. Today, all Jeepsters are avidly sought collectibles.

Willys could likely have lived just fine on Jeeps, Jeep wagons, trucks, and military vehicles. But the high optimism and booming seller's market of the early postwar years made returning to the passenger-car business seem like a no-lose proposition. Ward Canaday, who had taken over as president in 1950, entertained numerous ideas. His final choice was a trim 108-inch-wheelbase unitized proposal engineered by the distinguished Clyde Paton and inventively styled by Phil Wright. It was ready for the road by 1952, when it was trumpeted as "The Revolutionary New Aero-Willys."

It was a fine effort. Fashionably square and slabsided, the Aero was relatively light (2500-2600 pounds), roomy, and blessed with good handling. There were four models at first: Aero-Eagle hardtop coupe and three two-door sedans. The Aero-Lark used the 75-bhp, 161-cid six-cylinder engine from late Jeepsters; Eagle and the Aero-Wing and Aero-Ace sedans ran an F-head version with 90 bhp. Though small, the 161 six delivered good performance, plus fuel economy on the order of 25 miles per gallon.