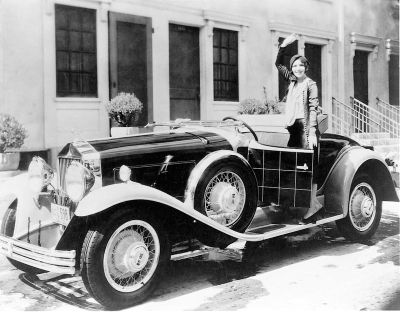 The 1930 Willys Knight roadster bears the names of both the dedicated owner and the innovative engineer who built the car.

Willys built passenger cars for nearly 35 years before it ever built a Jeep -- and for some years afterward, too. It started when John North Willys, an Elmira, New York, car dealer, bought ailing Overland of Indianapolis in 1907.

A year later he renamed the firm Willys-Overland, moved into the old Pope plant in Toledo, Ohio, and began rebuilding the firm's fortunes. He did that in spectacular fashion. For most of the Teens, the four-cylinder Overland was second in sales only to the Model T Ford. By 1918, J.N. Willys owned the world's second-largest auto company.

Willys-Overland entered the 1920s offering four-, six-, and eight-cylinder models spanning the low- and medium-price ranges. Sixes and Eights were temporarily dropped after 1921, the company concentrating on four-cylinder models.

Sixes returned in 1925, and fours were dropped the following year to appear under a new Whippet nameplate. Whippet flourished at first, but died after 1931 when Willys elected to concentrate all its dwindling resources on its own four-cylinder model. Meanwhile, an Eight joined the Willys line in mid-1930 carrying a 245.4-cid 75-bhp Continental engine.

An association with visionary engineer Charles Yale Knight led to the Willys-Knight. Knight's engines replaced ­conventional valves with two sleeves (between the piston and the bore) that moved up and down in the cylinders.

When slots in the two sleeves aligned either an exhaust or intake port was opened. The Knight's sleeve-valve engine had a great advantage in smoothness and silence of operation compared to ­conventional engines of the teens and '20s. As an added bonus carbon buildup made sleeve-valve engines run better, while other engines of the time required frequent "carbon and valve jobs" to remove carbon.

Knight engines were offered by European luxury makes such as Daimler in England, Voisin in France, and even Mercedes in Germany. Willys sold more sleeve-valve engines than anyone.

Early '30s Willys-Knights were sixes offered in two series. Smaller models had 178 cid, 53-60 bhp, and wheelbases of 113 or 115 inches; the larger ones used a 255-cid engine with 72-87 bhp in 120- and 121-inch chassis. Prices were rather stiff -- $975 to around $1900 -- so demand tailed off quickly as the Depression took hold. Also by that time conventional engines were as smooth and quiet as the more expensive Knight engines.

Willys' production withered to only some 27,000 for '32. With that, J.N. Willys, who had held the largely honorary post of board chairman since 1929, resigned his recent appointment as U.S. ambassador to Poland and returned to rescue his company, something he'd done twice before.

J.N. chipped in $2 million of his own money and personally assured dealers and creditors that all would be well, but Willys-Overland was forced to declare bankruptcy. The company was reorganized and resumed production, but managed only about 13,000 units in 1934. It would not emerge from receivership until 1935, days after John North Willys succumbed to heart troubles.