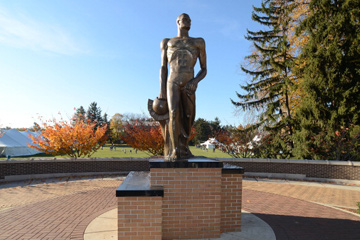 The wave disk generator was built by a group of researchers at Michigan State University.
Mark A. Cunningham/Getty Images

Despite its name, the wave disk generator (WDG) won't help you catch any actual waves and it doesn't even generate disks. Surfers and Discobolus-lovers everywhere are now crying. But what it does do, in theory at least, is generate power for your car.

The WDG (no relation to WMDs), is a newly designed generator that uses battery power, oxygen and good old-fashioned gasoline to spin an internal disk extremely fast to produce power for a car. OK, so let's get this out of the way first. Yes, this new idea for propelling a vehicle sill requires the use of gasoline. Although we have computers in our pockets and landing on the moon is beyond old news, gasoline is still pretty effective. Why? Well, gasoline is very good at exploding, and when explosions happen, things tend to move.

What's great about the WDG is that the amount of gasoline it needs is far less than an internal combustion engine (ICE). An ICE engine uses only about 15 percent of its fuel for propulsion [source: Boyle]. Fifteen percent! That means that 85 percent is being spent-up and basically going to waste. To put it in perspective, think of fuel as the money you bring home from work. If the government took 85 percent of your income, you'd be working really hard for almost nothing. True, an ICE engine is an amazing invention -- but efficient it is not.

So why is the WDG the anti-engine? Probably because it doesn't have any internal moving parts. Pistons? Don't need 'em. Crankshaft? Nope. Transmission? Forget about it! Ok, you get the idea. Oh, and you don't need any cooling system or lubricants either. It's the anti-engine in part because it's not actually an engine but also because this propulsion system could revolutionize the way we move our vehicles. But we've all heard that before, so what makes this one so special? To figure that out, we need to know how the WDG actually works.

The wave disk generator was built by a group of researchers at Michigan State University, with a man named Norbert Müller (pronounced like Ferris Bueller) heading up the team. At first glance, the wave disk generator looks more like a pagan sun than a revolutionary propulsion system. Maybe Winston Churchill was right when he said, "The farther backward you can look, the farther forward you can see" [source: Brainy Quote]. OK, so that quote may be a little out of context but the design of the WDG does look like old sun images, just see for yourself.

But enough about the sun. Let's talk about how it works. We're going have to board the technical train for just a moment so we can learn how this disk actually produces power. Next stop, Eurekaville, or Smartertown or...just forget it, this isn't working.

Like an internal combustion engine, air and fuel are inserted into the generator. The rotor first starts spinning using battery electricity. So technically, the wave disk generator system is a hybrid system [source: ARPA]. As the rotor spins, pressure builds inside the chambers filled with air and fuel.

The pressure then creates a shockwave inside the chamber and moves towards the openings where the fuel and air were first inserted. Before they can reach the opening, the rotor spins and closes off the opening. The compressed mixture is then ignited and the exhaust is sent out through an open port, which causes the rotor to spin faster. The spinning rotor creates electricity that it sends back to the battery and the process continues throughout all of the chambers [source: Knight]. 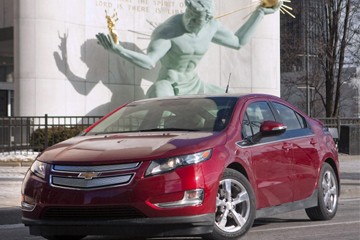 Send in the Skeptics

The Wave Disk Generator is obviously a novel concept. But having prototypes work in lab is not the same as building the real thing and putting it inside a car. Soon, Müller and his staff will test a 25-kilowatt wave disk generator, which is equivalent to about 34-horsepower, just to see if it will scale to real-world scenarios [source: Nesbit]. If it works, the generator could revolutionize the automotive and energy industries; but if it flops, it could get tossed on top of a growing, heaping pile of energy prospects that never quite panned out.

Any new idea takes on a lot of criticism, especially in the beginning, and a few people have take swings at the WDG's efficiency claims. Some believe that reaching 60 percent efficiency is just not possible. If it does work though, Müller wants it to move hybrids 500 miles (804.7 kilometers) on a single tank of gas, and do it cheaper than any other hybrid on the road today [source: Rice].

I'd be lying if we said we weren't hoping for that. And you'd probably be lying too if you said you didn't want to save gas on each trip and pump less CO2 into the air. But no matter what we're all saying, if the wave disk can outperform our beloved internal combustion engine we might have the best of both worlds -- power and efficiency at our fingertips. Or foot pedals...whichever one, really.

Everyone has an opinion when it comes to an engine or generator that's trying to take the place of the internal combustion engine, and most aren't happy about it. It can't be overstated how much the ICE has revolutionized our world, but the idea of something much more efficient taking its place is, honestly, exciting. Needless to say, I'm cheering for the wave disk. And not just so I can tell my friends that I wrote about it long before we were all driving it (although I won't pass that opportunity up if I ever get the chance). But what I love about researching articles like this is the chance to discover a new technology that has so much potential. When we all have flying cars (because we WILL have flying cars), I hope wave disks (or something even better) are powering them. Not only would we be saving a ton of money on gas, but I'd get to say things like, "Back in my day, we had to add oil and coolant, shift the transmission and worry about the dang engine overheating!" to my kids. That would be worth it right there, wouldn't it?

How to Static Time an Engine
How much horsepower does a performance muffler add?
What are the types of internal combustion engines?