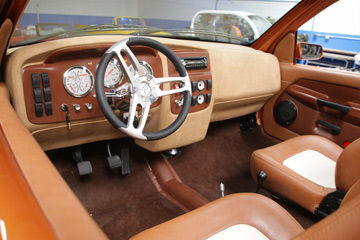 The WaterCar Python is steered the same on water as it is on land.
WaterCar

Making the switch from land to water is always a challenge with amphibious cars and the Python holds true to that rule. Yet changes in marine technology have made the transition a bit smoother than in earlier models.

Selby said one of the advantages of the Python was its use of a water jet propulsion system, so there's no propeller hanging off the back. The LS engine and Mindiola gearbox work together to provide power and torque to the propulsion unit. This propulsion unit -- the company is testing out a few commercial models before settling on one -- essentially sucks water in using an impeller and the resulting powerful water-stream pushes the craft forward. Directing the stream through a movable nozzle allows steering.

Since no propeller is necessary and the small unit can be tucked away in the back of the vehicle, Selby said the Python is steered the same on water as it is on land -- via steering wheel.

"You turn the steering wheel left, and you go left," he said. "We did that for safety reasons. We didn't want a system where it used different steering mechanisms for water and land. If you keep it simple it's safer."

So as the Python moves through the water observer will see the wheels turn, but the wheels have nothing to do with acting like rudders -- it's actually the water propulsion nozzle below the waterline directing the stream.

Observers will also notice the wheels are tucked up into the body of the car. This was another innovation for the Python. The suspension system uses opposing air shocks to lift and lower the wheels when the Python is in the water or on the road. The air system also cushions bumps while driving on land.

But one of the biggest challenges for the company was finding a way to cool the engine. The propulsion unit is cooled by water, but the engine itself is the standard air- and liquid-cooled system. In other words, when the Python is on the water, the engine would be unable to cool itself as it does on the road.

The company's eventual solution was to separate the engine cooling system and mount it so it could still work on the water by ducting cool air from the front of the car to the back engine compartment. This system was then integrated into the overall Python design so nothing looks out of place.

And it's really that James Bond-like ideal of a boat that looks almost exactly like a car running on the water that appeals to many buyers. Yet the company does bow a little to design because for the somewhat hefty price tag and the custom-built nature of the car, a customer can have it any way they want it.

Keep reading to learn about Python options and some of the unique details required to drive this one-of-a-kind vehicle.