Where the Rubber Meets the Water 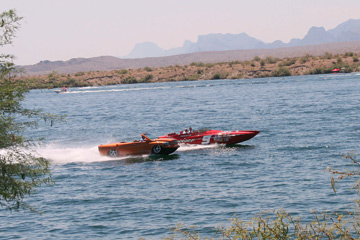 The engine currently used in the Python produces about 450-horsepower; however, the company is experimenting with a 650-horsepower model.
WaterCar

Selby said the early models of the WaterCar Python were aimed at producing power and creating the best design to shove a 3,800-pound (1,724-kilogram) boat through the water, though the weight at that time was actually closer to 5,000 pounds (2,268 kilograms). Car-side issues were mostly solved, as were strict boat issues. Where it all came together was getting the two disparate machines to mesh, especially on a performance level.

"Some of the early engines we tried didn't work out," Selby said. This included a Subaru engine that would burn out after only a few runs. They eventually settled on the General Motors LS series, an aluminum, V-8, crate engine that came in a range of power levels and was the workhorse behind the popular Corvette Z-series.

The engine currently used in the Python produces about 450-horsepower. Selby said the company is experimenting with a 650-horsepower model. The LS crate engines are mounted in the Python's rear and drive both the rear wheels and the propulsion engine through a proprietary Mindiola gearbox system.

Selby said the LS engines have been more than reliable, with no break-downs to date, and the price is right, too -- about $8,000 for the 450-horsepower engine. However, a new Python owner stepping up to the 650-horsepower version would shell out about $26,000 for the engine alone.

Stepping in tandem with engine development was the car's hull design. The Gator used a V-hull, or displacement hull, that limited its speed in the water no matter how much shove an owner could push from the engine. The Python, however, uses a planing hull. Once the vehicle reaches planing speed it essentially rides on top of the water, rather than pushing through it. This is the same type of hull found on racing boats. "Your speed is essentially unlimited with a planing hull," Selby said. "We've been out there on the water at 60 (miles per hour), and that's plenty fast enough for me."

With the technicalities out of the way, the company began fine tuning the look and function of the Python. On the next page, we'll cover some of the specifics of what happens when a car turns into a boat, and some of the unique challenges faced by a Python owner.