What's Under the Hood (Or in the Hull) 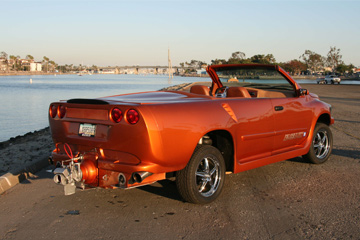 Is it a car, or is it a boat?
WaterCar

To understand the Python you have to understand the first offering by WaterCar, the Gator. The Gator uses a combination of a Volkswagen Beetle chassis and an amalgamation of Jeep CJ parts and accessories to create what could be the ultimate fishing experience.

"The idea was to make a vehicle where you could drive to a lake, drive in and go to your favorite fishing spot," Selby said.

The heart, and base, of the Gator is a floating body and integrated mechanics shell crafted from fiberglass and flotation foam. Plunk the base on a VW pan chassis, add in the company's specialized gear box allowing conversion from car to boat and a driver is on his or her way to becoming a fisherman with the shift of a lever.

Dave March and WaterCar then took the idea of the integrated hull and mechanics package and expanded on it. Rather than utility he pushed performance and looks -- something a little sexy and grandiose that would turn heads at the lake.

"March looked at other amphibious cars and said, 'I want it to go faster,'" Selby said. The early prototypes used a Camaro-esque set-up, which didn't yield an acceptable level of performance.

Successive returns to the drawing board and testing lab yielded a slow progression of designs that looked like a Corvette from the back and a boxy convertible sedan from the front. For the mariners out there, well, the car didn't look like any other boat on the market. Yet it did work like a boat, despite its appearance. The company had achieved its goal and that was the ultimate appeal of the Python -- speed and performance on land and on water, a juggling act few companies are willing to learn, let alone perfect.

Up next, find out how WaterCar handled the myriad of challenges facing a company building a car and a boat in one package -- including how to steer on land and water.