The Wally Welch Mercury: Profile of a Custom Car 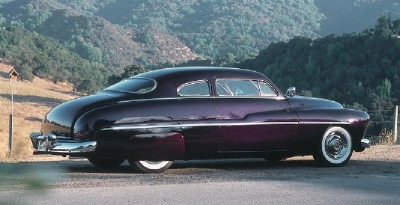 It's no wonder the Wally Welch Mercury has made custom car history; it's common among automotive enthusiasts to lust after the cars of their youth. By the 1980s, custom car fans who had been teenagers in the '50s were beginning to remember fondly the cars of their teen years. Older and more financially stable, a few of them gradually began to seek out old, historic cars and restore them.

One of the men who started this trend did so almost by accident. Before we get to his story, however, we should examine the history of one of the first 1949-51 Mercs ever to receive a top chop.

Wally Welch bought a new 1950 Mercury coupe in early 1950 and immediately took it to Gil and Al Ayala's shop in East Los Angeles to be customized. The Ayalas chopped the top about four inches in the front and five in the rear, and removed the drip rails.

Up front, they molded in the front pan and grille shell, moved the headlights three inches forward and frenched them in, nosed the hood and rounded its corners, and installed five 1951 DeSoto grille teeth. They also frenched the taillights, rounded the door corners, smoothed the rear deck, shaved the door handles, and set electric ­pushbuttons into the chrome rub strips.

Wally Welch had the front pan and grille shell of his Mercury molded, and the headlights were frenched in.

Finished in lime gold paint, the car appeared on the cover of the April 1952 issue of Hop Up magazine. Soon thereafter, Wally took the car to the Barris Kustoms shop, where they added two more DeSoto teeth and painted it metallic purple. This version appeared in the December 1952 Trend book Restyle Your Car.

Wally sold the car to Joe Contrero of East Los Angeles in 1954 or '55. Joe swapped the stock Mercury flathead for a Ford Y-block V-8, then parked the car in '57 when he joined the Army.

Fast forward to 1985 and enter Joe Eddy of Rosemead, California. At the time, Joe was a well-known Ford F-100 truck customizer who also appreciated traditional customs. A neighbor kid kept telling him about a '50s custom parked under an avocado tree in East Los Angeles. Finally, after the kid said the car looked like Richard Zocchi's Cool 50 Merc, Joe decided to investigate.

The car was a bit of a mess. It had been sitting for almost 30 years. The top was covered in white housepaint to protect the car from the elements, but everything was there. Joe struck a deal that day.

Joe could tell it was a chopped Merc from the 1950s, but he didn't know that it was one of the first few leadsled Mercs ever chopped. Still unaware of the car's pedigree, Joe began restoring it.

He retained the exterior design, but decided to upgrade the mechanicals. He installed a 350-cid Chevy V-8, a Turbo 350 transmission, a Ford nine-inch rear end, and power steering from a '76 Ford half-ton pickup. He lowered the car even further than the Ayalas had by reversing the front spindles and cutting the coil springs. Inside, he added air conditioning, a contemporary stereo, and silver-gray cloth upholstery by Frank's of Whittier, California.

During the restoration process, Joe unearthed the April 1952 issue of Hop Up Magazine and realized what he had. It was too late to restore the car 100 percent accurately, and besides, perfect restorations weren't so important at the time. Nonetheless, Joe retained the 1950s look and revived a long-lost custom.

Joe kept the car until 2004, when he sold it to collector Justin Mozart. At the time of this writing, Justin had plans for a complete period-correct restoration. He was uncertain if he'd restore it to the Barris or Ayala form. Either way, he'll have an important piece of custom history.