When you vulcanize a tire, what do you do to it? 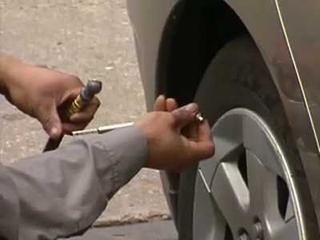 A standard tire is comprised of several parts, such as the body plies, steel belts and bead bundle. Once a tire-building machine has assembled these components, a tire’s rough size and form begin to take shape. At this point, however, the various pieces are only loosely held together and the tire is essentially just smooth rubber. The tread patterns that give a tire its traction are added by running it through a curing machine. Similar in function to a waffle iron, the curing machine molds the traction patterns and markings onto a tire. The heat that this process generates also serves to fuse the tire’s various components together. This is what’s known as vulcanizing. This process is followed by several finishing procedures. Once the tire has undergone a number of standard inspections, the manufacturing process is complete.

There are many different markings that appear on a standard tire. For example, if a “P” symbol appears on the sidewall, it means that the tire is manufactured for use on a passenger vehicle. Other common designations are “LT,” which stands for light truck, and “T,” which stands for temporary tire. If you look at your tire, you’ll also see the different grades that a tire is assigned as part of the Uniform Tire Quality Grading system. Other markings on your tires will indicate tire width, tire type, aspect ratio, rim diameter and construction type. A tire’s service description markings indicate a couple of things. First, a tire’s maximum rated load capacity is indicated by a number -- a higher number means a higher loading capacity. The other service description is a speed rating. Next to the load rating number, you’ll find a letter that symbolizes the highest speed permitted for a particular tire.