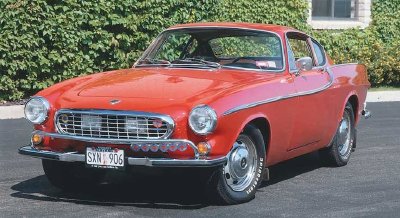 Volvo’s P1800 was just what you would expect from a sports car made by Volvo -- not exactly the fastest or most stylish car on the road. See more pictures of sports cars.

Volvo has been known for a lot of things since its founding in 1927 -- durability, dependability, and quality among them -- but sports cars do not spring to mind. All the same, this article covers Volvo’s entries into the sports car arena -- unlikely though they may be.

Arriving in 1961, the Volvo P1800 came as quite a surprise. That Volvo would even attempt a sports car seemed unnatural to many. For its part, the P1800 wasn’t much of a sports car: performance was much more daring than anything Volvo had done before, but it was nothing spectacular, and the already-dated styling didn’t much help. By the end of its run (going through two other designators, 1800S and 1800E, along the way), the P1800 was a solid, dependable cruiser -- about par for the course for Volvo.

A decade later, Volvo updated the P1800’s body, such that the Volvo 1800ES was a sporty station wagon. Yes, you read that right. Built on the same general principles of the P1800, the 1800ES was converted into a relatively stylish wagon before ancient styling and increasingly-restrictive emissions laws forced it into retirement.

In the following pages, you can find out more about Volvo’s brief foray into the world of sports vehicles, with car profiles and pictures.

This Volvo P1800 is distinguished from its successors by the stylized C-panel script.

Some car companies seem so sober that it’s difficult to imagine them producing a sports car, or even a sporty coupe. Volvo, which began building cars in 1927, was just such a company, so sensibly Swedish that its P1800 was a complete surprise.

Volvo had built a handful of fiberglass-bodied sporty convertibles in the Fifties, though this wasn’t a serious production effort. But the Volvo P1800 was. In fact, Volvo spent a lot of time on the new coupe before putting it on the market. One reason: there was no room for another model on assembly lines that were already overflowing. For this reason, tooling for the Volvo P1800’s unit body/chassis structure was contracted to Pressed Steel in the UK, which also built the shells initially and sent them on to Jensen in West Bromwich for final assembly.

There was nothing startling about the Volvo P1800 apart from its looks, which were only startling for a Volvo. Running gear was borrowed from the firm’s existing 120-Series “Amazon” sedans, which meant a sturdy but orthodox 1.8-liter overhead-valve four (initially rated at 100 horsepower) and a 4-speed all-synchromesh gearbox with overdrive turning rear wheels attached to a coil-sprung rigid axle with Panhard-rod location. Front suspension was equally ordinary: independent with unequal-length A-arms and coil springs.

The driving position in the Volvo P1800 is low but comfortable.

Styling, curiously enough, was a mixture of Frua and Ghia ideas, and rather dated by the car’s late-1961 debut. The lines were curvy, the nose jutted out to an eggcrate grille, and there were modest tailfins above bullet-shaped pod taillights. The roof was quite low, but so was the seating, which gave a real “bathtub” feel. Though mainly marketed as a two-seater, the Volvo P1800 did have a small back seat that was more like a shelf -- good for parcels, bad for people.

It all added up to a more stylish Volvo with a sporty air but no sports-car credentials. Ride and road manners were able enough, but performance was pedestrian. Still, the Volvo P1800 had much to offer: comfortable seats, an effective hearing/ ventilation system, an orderly dash with full instrumentation, rugged construction, even a useful trunk.

In short, it was an honest car that was still dashing enough for the country club -- exactly what Volvo wanted. Helping its image in the UK and, to a lesser extent, the U.S. was The Saint TV series, where Simon Templar (a.k.a. Roger Moore) drove a Volvo P1800 in almost every episode.

With annual volume of only about 5000 units, the P1800 wasn’t going to make Volvo rich, but it proved a steady seller while benefiting from a number of changes. In late 1964, after the first 6000 or so had been built, production was transferred from England to Sweden and the name changed to the Volvo 1800S. There were also some minor cosmetic alterations, mainly a less gaudy grille insert and bodyside chrome repositioned to de-emphasize the curious upswept character line in the doors.

The Volvo P1800 had a crowded under-hood compartment that nevertheless was well-tuned and precise.

Displacement went to 2.0 liters for 1968, in line with other Volvos, though the model designation stayed the same. The following year brought Bosch fuel injection for what was now called 1800E (the letter denoting Einspritzung, German for fuel injection). Also on hand were a black grille, rearranged dash, a new steering wheel, flow-through ventilation system (identified by small exhaust grids on the rear flanks), the beefed-up gearbox from Volvo’s six-cylinder 164 sedan, four-wheel disc brakes, and new five-spoke cast-alloy wheels (which looked like wheel covers).

By this time, top speed was up from 109 to 115 mph, the 0-60 sprint down to 10 seconds or so from the original 14. Still, the Volvo 1800 mainly appealed as a snug, fairly agile little “sedan” able to cruise all day at a comfortable 90 mph -- the sort of solid, sturdy, reliable, and functional car for which Volvo had become famous.

If the original Volvo 1800 had seemed dated in 1961, it really looked old-hat 10 years later. But Volvo still had one more trick up its sleeve that would keep the 1800 going a few more years. To find out what it was, just read on. 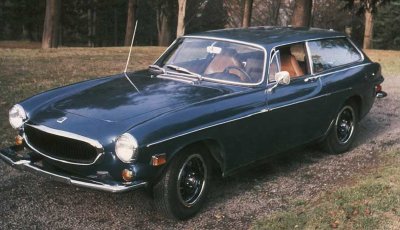