How the Volvo Your Concept Car Works

Browse the article How the Volvo Your Concept Car Works 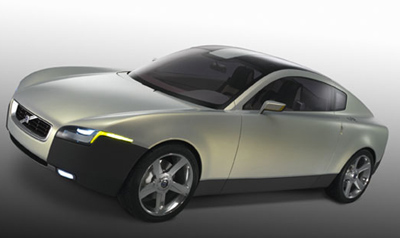 Image Gallery: Concept Cars The Volvo Your Concept Car. Most striking when looking at it from the front is that the YCC doesn't have a hood. See more pictures of concept cars.
Photo courtesy Volvo Cars' Newsroom

The Volvo Your Concept Car (YCC), like all concept cars, provides the auto maker with a valuable testing ground to push the limits of new car designs. While the design of the YCC is filled with forward-looking ideas, the most innovative aspect of the car is not the design, but who designed it -- an all-woman design team.

Unveiled at the 2004 Geneva Auto Show, the YCC is the first concept car to be designed from start to finish by a team composed exclusively of women. Women are a growing market for the Swedish auto maker. According to Volvo, 54 percent of its U.S. buyers are women, and its female customer base in Europe is growing. With women identified as a key market, Volvo handed the drafting pencils over to those who best know what women want from their cars.

In this article, we'll take a look inside Volvo's newest concept car, and see what these designing women produced.

The YCC is a two-door sports coupe and is tame by some concept car standards (see the Toyota PM for a more radical concept vehicle). In recent years, Volvo has been rounding off and softening its traditionally boxier design. The YCC continues that trend, and is not far removed from a production design. While not yet ready for production, some of its design elements could soon be adopted in current models.

The front end is lower than a traditional Volvo and the fenders are in sight for better road vision. Additionally, the rear window extends to the extremities of the car, and the tail end slants back slightly more than the Volvo S series models. Together, these elements allow the driver to see all four corners of the car's exterior.

"We wanted to create a beautiful car," says Anna Rosén. "Not brutal, but tough."

Most striking when looking at the car from the front is that it doesn't have a hood. The design team determined that their target audience doesn't need to look under the hood. The front section of the chassis can be lifted in a garage, but it does not open like a traditional hood.

There are two capless ball-valve filling points, like those of a racing car, that allow the driver to add gasoline and windshield washer fluid. These capless filling points eliminate the need for caps or latches, which were identified as nuisances by most female drivers.

Another radical element are the gull-wing passenger doors, which are intended to allow the YCC easier entry. The doors lift up overhead like the rear door of a hatchback. These doors are intended to ease entry into the back seat.

Additional exterior features include an Easy-Clean paint that behaves much like the coating on a non-stick cooking pan. Dirt doesn't cling to it as easily, and it washes off with very little effort. The car also features run-flat tires, so that it can be driven a safe distance after a puncture.

Now, let's open the YCC's gull-wing driver-side door and step inside to look at the interior. 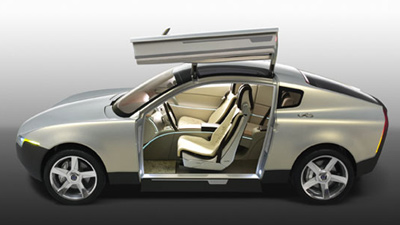 YCC designers describe the car's interior as more living room than cockpit, replete with modern furnishing fabrics. The interior design hints at the role women played in the cockpit with the ponytail notch in the headrest, the additional thought for storage, and interchangeable seat covers and carpeting fabrics.

"Let's bring the living room into the car," said Maria Uggla, Color and Trim designer. "Let's use materials, not obscured by coats of shiny enamel."

The interior design of the car is adjustable. The seat pads can be exchanged for different colors and fabrics, including leather, linen, wool bouclé (a knit fabric), or a shimmering yellow-green embroidered seat pad. The carpet can also be swapped out for different styles. The idea of exchangeable carpet and seat pads is to give owners options when they are tired of looking at the same fabric or if the fabric becomes worn. Changing the interior gives owners a sense of a new car. These exchangeable seat covers and carpet are also washable.

Space and storage are maximized throughout the YCC interior. The gear shifter, usually positioned between the driver and passenger seat, is located on the steering column, and the parking brake is electronic and integrated further increasing interior space.

Moving from front seat to back seat, cinema-style seats in the back can be folded up to allow more space for luggage and other cargo. Designers found that drivers use their back seats more often for cargo than for passengers. When there are passengers, they put the seat down as they enter. 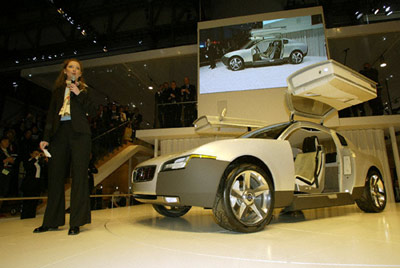 The YCC is powered by a low-emission 215 hp, five-cylinder Partial Low Emission Vehicle (PZEV) engine with an Integrated Starter-Generator (ISG), which allows the car to meet the tough emission standards in states like California. The ISG prevents unnecessary idling because the engine cuts off when stopped at a red light. The car comes to life again as soon as you press the accelerator.

The car features a 6-speed Powershift gearbox with a fully automatic transmission mode. You can also choose manual shift by using the gear controls on the steering column. Powershift means that the car has a dual wet-clutch transmission system, which ensures that the car shifts gears at the right revs for smooth driving and low fuel consumption.

In the next section, we'll look at some of the more unique technologies of the YCC. 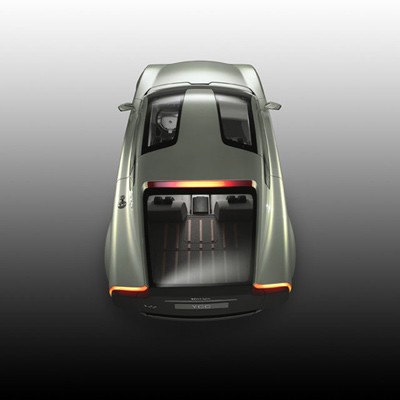 Cars will soon have embedded technology to make them easier to operate. The YCC features several of these advanced technologies, which enable the car to adjust to your body type, assist with parallel parking, and open your car by sensing your presence near it. Let's take a look at these new technologies.

When you buy a YCC, your body is scanned at the dealership. Your proportions (height, leg length, and arm length) are used to define a customized driving position. This information is stored in your digital key. When you insert the key on the center console, the seat, steering wheel, pedals, driver's seat, head restraint and seat belt adjust automatically to give you the line-of-sight best suited for you. You can alter the custom settings, using the car's computer system and then save the new settings on your key.

Parallel parking assistance is a two-stage system. Press the parking assistance button to determine if there's enough room between two cars. Sensors measure the space. If there is enough space, press the Autopark button again. The car then helps you maneuver into the parking space, but you control the accelerator, brakes, and gear shifter. Toyota unveiled a similar technology in its 2003 Prius. Check out How Self-parking Cars Work to learn more about the technology.

If you have a lot of bags to carry to the car, press the Auto-Open button on your key ring prior to picking up the bags. As you stand by either rear wheel, the closest side door automatically opens. If you stand directly behind the car, the trunk opens.

Now let's meet the women responsible for designing the YCC. 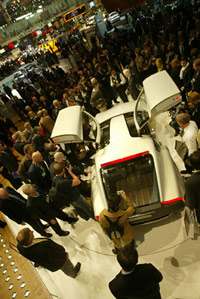 As early as the 1980s, Volvo formed a women's reference group composed of female employees. This group was called upon to test and assess new models at an early stage of development. Additionally, a women's focus group was convened in California for the development of the XC90 SUV, which was launched in 2002.

The idea for an all-female design team responsible for all decisions in developing a concept car was initiated in the fall of 2001. In June 2002, a small group of female Volvo employees delivered the concept and pre-sketches to Hans-Olov Olsson, Volvo President and CEO, and the executive management team, who gave the project a green light at the end of that same year.

For Volvo, and the auto industry, the YCC project marked a new way of thinking. Men typically dominate the car industry, and the YCC was the first project to employ a design team on which women made all of the development decisions.

"Of course, we're not doing anything that men couldn't do - we're all professionals in the car industry," said Maria Widell Christiansen, Design Manager of the YCC project.

However, this project was historical in its all-female approach. Let's take a closer look at the team.

Palmertz joined Volvo in 1995, and her positions with the company have included responsibility for the biomechanical aspects of crash-test analysis. Projects she has worked on include the inflatable curtain safety system and the development of a pregnant crash-test dummy.

Andersson has been with Volvo since 1995, and was the co-manager of the YCC project, along with Palmertz. Prior to working on the YCC, she was the project director for a concept model that is still in development.

Dr. Holmberg was responsible for the technical development of the YCC. Previously, she had worked on aerodynamics and chassis development for new Volvo models.

Christiansen joined Volvo in 1986, and managed the overall administrative responsibility for the YCC design team of 25 people.

Temm has been with Volvo since 1989, and has previously worked in the safety communication department. For the YCC project, Temm coordinated communications within the project. She's also tasked with ensuring that the world sees the YCC.

Ekelund joined Volvo in 1986, working as a design engineer and project manager. For the YCC, she was responsible for assisting in the technical side of the project and for coordinating the design engineering team with Holmberg.

A relative newcomer to Volvo, Rosén joined the company in 2002, working with the Volvo design strategy prior to joining the YCC project. On this project, she was responsible for the YCC's exterior design

Charwick started at Volvo in 1981, and has worked on interior designs of concept and production models. She used that experience to design the YCC's interior.

Uggla began work at Volvo in 2001, and designed the color and trim for the new Volvo S40 model and the V50. She also has worked on design and trim for other concept models in development.

For more information on the YCC and related topics, check out the links on the next page.