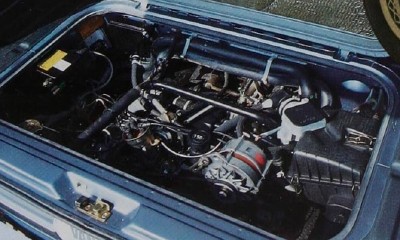 The 1983, the 2.0-liter flat four-cylinder engine in the Volkswagen Bus was re-engineered, going from air-cooled to water-cooled. It had 82 horsepower.
© Volkswagen of America, Inc.

The 1981-1985 Volkswagen Bus benefited from an accelerated rate of change, but its basic rear-engine, rear-wheel-drive design was about to be eclipsed by a new sort of minivan.

Even as Wolfsburg was planning changes to roll into the 1981-1985 Volkswagen Bus, Chrysler was already at work on its front-engine, front-wheel-drive minivans. As the Dodge Caravan and Plymouth Voyager, they would revolutionize the market pioneered by the Volkswagen Bus.

As those rivals were under development, Volkswagen bolstered the Vanagon with a quieter, quicker, and more-fuel efficient engine. It was introduced during 1983 and called the Wasserboxer. That was the German way of saying that the Volkswagen Bus flat-four had gotten water cooling.

Added to engine were passages for cylinder heads and piston sleeves through which liquid now flowed. On the nose of the Volkswagen Bus, below the false "grille," appeared a genuine one and behind it was a radiator. Coolant circulating from the radiator to the engine passed through a real heater beneath the dashboard and another optional unit under the rear seat, finally providing the Volkswagen Bus with bona fide cold-weather comfort.

The engine's new water jackets further isolated engine noise, and while the engineers were at it, they refined the boxer's pistons, valves, camshaft, and fuel-injection system and gave it a higher compression ratio, 8.6:1 compared to 7.3:1.

The downside was a price that kept escalating, with the average passenger Vanagon now listing for around $12,250. It was still worth paying, though, according to the professional testers.

"In our initial Vanagon road test...we said that the VW van is clearly

the leader in technological development in its class," Road & Track asserted in its May 1983 report on the water boxer Volkswagen Bus. "That's still true, as we discovered driving the standard shift and automatic Wasserboxers. The new engine's power, flexibility, economy and quietness are delightful and give the VW van a level of performance that is commensurate with its design."

This would be the final time most Americans would agree that Volkswagen could claim a clear design advantage in the small-van field.

But the Chrysler minivans, which were built on the company's front-drive K-car platform and were much more car like than the larger Vanagon, took the market by storm from their launch in early 1984.

Ford and Chevy weighed in for 1985 with the more conventional truck-based front-engine/rear-drive Aerostar and Astro, respectively. And the Japanese were now aboard with odd little home-market transplants. But it was the Caravan and Voyager that dominated, with combined sales of more than 160,000 in 1985, their first full year. Vanagon sales for 1985 fell to 16,803.

How did VW respond to declining Volkswagen Bus sales? With more power and a new way to deliver it. Find out on the next page.