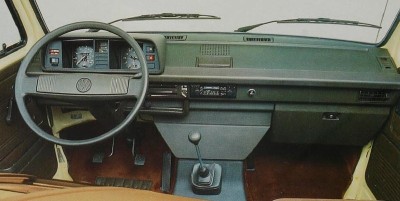 Gone, finally, was the overt bus-like driving position, but driving the tall, roomy, power-challenged 1980 Volkswagen Bus was still far from a car-like experience.
© Volkswagen of America, Inc.

Driving the 1980 Volkswagen Bus, which was officially marketed as the Vanagon, was a lot like experiencing a familiar flavor in a new and different wrapper.

Driving the 1980 Volkswagen Bus started with the realization that with curb weights up by about 250 pounds over the 1979 version, to around 3,300 pounds for the basic Vanagon, acceleration was still not a strong suit.

"Clearly, this is not acceleration that will elicit gasps of glee," Road & Track admitted, "but it does permit the Vanagon to keep up with everyday, around-town traffic."

Nobody ever purchased a Volkswagen Bus for its power and that wasn't going to change with the Vanagon. But sensitive drivers would be rewarded by the Vanagon's road manners.

Unladened weight distribution was now 50/50 and though the breadbox-on-wheels was still top heavy, the new suspension and wider track allowed it to circle the skidpad at a car like 0.79 lateral g forces, compared to the previous bus's 0.63 g's.

Resistance to crosswinds was better than ever, but much attention was again required of the driver in gusty conditions. The Vanagon's ride was firm, but overall control was far superior to that of domestic vans, which still used solid rear axles.

"Once you get used to being seated a couple of stories above the pavement, you can slice through twisty roads with abandon," Car and Driver said in its first test of the new Vanagon.

"Its steering is amply quick, and even has plenty of road feel and a strong sense of center, " the magazine continued. "Bumps, even in the middle of corners, don't have a prayer of deflecting the Vanagon off course. But like many a German car, it thrums its way across tar strips and surface imperfections."

All this goodness came at a price. Vanagons started at around $9,500 for 1980, and with options such as the $290 AM/FM cassette system and auxiliary heater, the cost of a VW bus could top $10,200. Most reviewers found it worth the money, however.

"All in all, the Vanagon is a major improvement over its predecessors and, in our opinion, maintains VW's position as the manufacturer of the world's leading van," said Road & Track.

Motor Trend liked the new Vanagon so much it named it 1980 Truck of the Year. "The Vanagon is one of the best utilitarian vehicles ever to take to the highway," the editors said. "Its efficient use of space, attention to ride comfort and sedan-like handling position it as the new high mark the industry must strive to equal."

"Some things, it's nice to see, just never change," concluded Car and Driver. "The VW bus stood apart from the crowd when the children of the Sixties were dropping out, and it's still a vehicle for the alternative-minded now that they've dropped back in. Of course, these days the VW bus's special attractiveness results from engineering refinement rather than counterculture appeal."

That "engineering refinement" would soon include a water-cooled engine. Would it be enough to stave off yet another batch of competitors? Find out beginning on the next page.