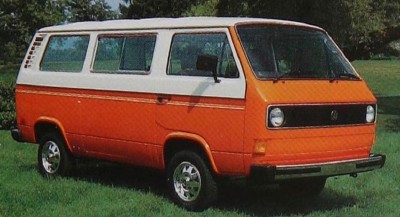 Debuting for 1980, the third-generation Volkswagen Bus was renamed the Vanagon. It retained an air-cooled rear-engine layout but for the first time did not share its chassis with the Beetle.
© Volkswagen of America, Inc.

A new model name debuted with the 1980 Volkswagen Bus: the Vanagon. It graced the third-generation Volkswagen Bus, which ushered in the biggest changes in the big box since the original version of three decades earlier.

In the end, it decided the original rear-engine/rear-drive layout would provide the most-efficient packaging and the best traction. Thus was the layout of the third-generation bus decided. It debuted for 1980, called the Transporter in Europe and the Vanagon in the U.S.

Other than the powertrain arrangement, the Vanagon was a clean-sheet design. It had a new platform, fresh sheetmetal, and a redesigned interior. Wheelbase was stretched 2.4 inches, to 96.8, and the body shell was widened by 3.3 inches.

The platform's floor was lowered by 2.4 inches, the spare tire moved to beneath the nose on a drop-down cradle, and the fuel tank, now at 16 gallons, was relocated to under the front seats. (Oil could be checked and filled from behind the hinged rear license plate cover.)

The suspension was completely new and qualified as a truly all-independent design. In front, trailing arms and torsion bars were discarded in favor of unequal-length A-arms, variable-rate coil springs, tube shocks, and an anti-roll bar.

In back, the torsion bars were banished and replaced by a semi-trailing-arm design with progressive-rate coil springs and tube shocks. The track was wider by 6.9 inches in front and 4.5 inches in the rear.

As before, overseas markets were offered a variety of body styles, including commercial vans and pickup trucks, but Americans got only seven- and nine-seat passenger models, a stripper Kombi with just two front seats, and the Westfalia Camper.

About half of all VW vans were purchased for personal use, so designers concentrated on making the Vanagon user-friendly inside and out.

Overall, there was a 15-percent increase in interior volume. The center aisle between the front seats was wider by 15 percent. The rear floor over the engine box was lowered 7.9 inches, increasing luggage space in the rearmost compartment by 40 percent, to 36.6 cubic feet.

The sliding side door was bigger, the rear hatch increased in size by a full 75 percent, and the rear window was enlarged by 50 percent. Total glass area was up by 22 percent.

The interior featured upscale trim, full carpeting, and door map pockets. The angle of the steering wheel was a little less bus like than before, and the dashboard was as up to date as in most passenger cars.

Heating and fresh-air ventilation were as good as ever with the Vanagon underway, but VW still didn't furnish a fan as standard; buyers had to pay extra for a three-speed blower. A another wise option was the gasoline-fired auxiliary heater, which cost $370.

The body contours were actually less rounded than before, though the windshield had more rake. On the safety front, three inches of sheetmetal had been added ahead of the front wheels to serve as a crush zone. Side-door beams and structural reinforcements satisfied all U.S. safety standards for cars, even though the Vanagon didn't have to meet them because it was classified a truck.

Though the new nose had what looked like a black plastic grille, the Vanagon was the only German-built VW product to retain an air-cooled engine. In the U.S., the only engine was again the all-alloy 2.0-liter horizontally opposed four with electronic fuel injection. It remained at 67 horsepower and 101 pounds/feet of torque.

The standard four-speed manual transmission had a final-drive ratio of 4.57:1, but for the first time it had an 0.88:1 overdrive top gear. A three-speed automatic was optional at about $350 and had a 4.09:1 final drive.

What was this third-generation Volkswagen Bus like from behind it's still quite bus-like wheel? Go to the next page.