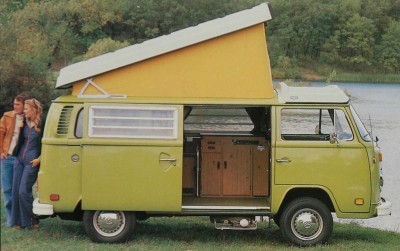 The 1972-1979 Volkswagen Buses averaged around 70 horsepower, not enough to keep them from feeling slow. That was especially true with heavier versions, such as this 1979 Campmobile model.
© Volkswagen of America, Inc.

The 1972-1979 Volkswagen Bus kicked off a four-year advance on the powertrain front, and concluded with VW planning for the third-generation Volkswagen Bus.

The 1972 Volkswagen Bus gained the 1700-series engine from Volkswagen's model-411 passenger car. It had 72 horsepower and cut 0-60 mph times from over 30 seconds to a more-acceptable 22 seconds. Quarter-mile times fell to 23 seconds, and official top speed increased to 75 mph.

For 1973, the Volkswagen Bus was offered for the first time with automatic transmission. It was a $235 option and had three speeds. It was thoughtfully matched to the 1700 engine, maintaining each gear until well up in the rev range and downshifting promptly for good passing response. At about 23.6 seconds 0-60 mph, overall acceleration with automatic transmission was little different from that with the four-speed manual gearbox.

The automatic did not have an overdrive fourth gear, but its 4.45:1 final-drive ratio allowed the engine to turn at about the same rpm on the highway as the 5.37:1 ratio of the manual transmission. Fuel economy was not as good with the automatic, however, and could dip to around 16-17 mph.

The automatic arrived the same year VW stopped listing gross horsepower ratings and, like many manufacturers, switched to net ratings. Gross ratings were taken under optimum laboratory conditions. Net ratings were designed to reflect output with the engine installed in the vehicle and with power-sapping accessories and drive belts in place.

The 1979 Campmobile listed for nearly $8,000, but featured sleeping space for four, plus a stove, refrigerator, table, closets, and louvered side windows.
© Volkswagen of America, Inc.

Thus the 1700 was rerated at 63 horsepower at 4800 rpm with manual transmission and at 59 at 4200 with automatic. Automatic-transmission models enjoyed more torque, though, 83 pounds/feet to 81, at the same 3200 rpm, which helped account for their similar acceleration.

The bus regained some of the lost power for 1974. It borrowed the 1.8-liter boxer from Volkswagen's 412 passenger car range and also added electronic fuel injection. Horsepower was now 67, and a manual-transmission van could run 0-60 mph in 20 seconds flat.

The 20-second barrier fell in 1976, when the Volkswagen Bus borrowed yet another engine, this time the 2.0-liter flat-four from the Porsche 914 sports car. Horsepower remained 67 at 4200 rpm, but torque climbed to a relatively robust 101 pounds/feet at 3000. Even with automatic, VW buses could now run 0-60 mph in 19.9 seconds.

Evolution of the second-generation bus slowed dramatically after this. About the only major change was in price, which by 1979, had climbed to $7,595 for the seven-seat model.

Driven by the escalation of the German currency, price increases were helping accelerate a sales decline that had been in progress for several years. VW sold 23,322 buses in the U.S. in 1978, but only 15,990 in 1979.

Worldwide, however, the Volkswagen Bus was still outselling all competitors and the company knew it had to update the design to protect its market share. Discover on the next page how Volkswagen did it.

In addition to passenger and camper models, the Volkswagen Bus was available in a variety of cargo versions, including this pickup truck.
© Volkswagen of America, Inc.