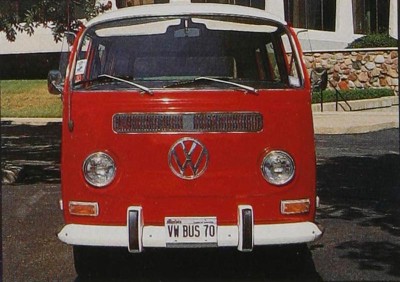 By the era of the 1969-1971 Volkswagen Bus, VW's lovable, adaptable rear-engine box had become an iconic on America's highways and in its driveways.

The Volkswagen Bus had gained acceptance among suburban families, car poolers, and of course, counterculture types. The passenger-carrying Station Wagon model of the Volkswagen Bus had long been a favorite of the young and young-at-heart, and "hippy vans" painted up in psychedelic designs were a fixture of the 1960s.

Road Test magazine contrasted the Volkswagen Bus with the era's muscle cars in its review of a 1970 VW Station Wagon model: "[E]scape via a bus is far less expensive and more promising in terms of birds and bees than being encumbered with a bucket-seated, thirsty-engine GTO or Scat-Pack Dodge. Admittedly, however, flower symbols and curtained windows seem to attract the police as readily as racing stripes."

The Volkswagen Bus's stopping ability got a boost for 1971 with the introduction of front discs and a 20-percent increase in the lining thickness of the rear drums. VW also installed a regulator in the rear brake circuit that functioned like an early anti-lock system to help prevent premature wheel locking in hard stops. Wheel width also increased by half-an inch, to 5.5 inches.

By 1971, Detroit had responded to the Volkswagen Bus with a new crop of competitors. Unlike the compact-car based vans that Ford and Chevy offered in the early 1960s, these were true trucks with front-mounted engines and optional V-8s that allowed them to pull heavy trailers.

These American vans the Volkswagen Bus in size and in price. The new Chevrolet Beauville Sportvan, for example, was nearly 17 feet long, had a 250-horsepower 350-cubic-inch V-8, weighed 4,600 pounds, and cost $4,775. A 1971 Volkswagen Bus passenger model with the optional radio and sliding steel sunroof listed for $3,164 and weighed 2,900 pounds.

In its April 1971 issue, Motor Trend compared a Volkswagen Bus Station Wagon model against just such a Sportvan, plus a Dodge Royal Sportsman B300, and a Ford Chateau Club Wagon.

"The Volkswagen Station Wagon came out best in terms of size, finish, quality and ease of handling," the magazine said. "But, for sheer load space, the VW couldn't hope to match the Ford, Dodge or Chevy Vans. VW was also at a distinct power disadvantage, with an engine less than one-third the size of the optional V-8s available in the Detroit-made vans."

But, Motor Trend concluded, "For everyday driving, though, our staff still preferred the VW van over the rest of the group."

The second-generation VW bus introduced to the van world the sliding side door. It was on the right side.
© Vince Manocchi

So did many buyers, enabling total production of the Volkswagen Bus to hit the three-million mark during 1971.

New features, more power (including a Porsche engine!) were among changes in store for the Volkswagen Bus as the 1970s rolled along. Learn about them beginning on the next page.