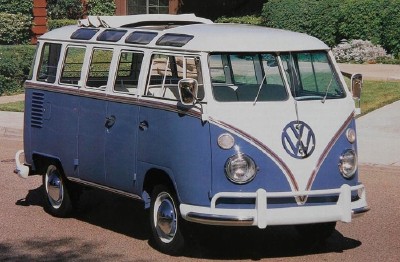 The 1960-1967 Volkswagen Bus gained new features and more power, and also some competition.

In 1960, the bus got real split front seats to create a narrow aisle that allowed movement though the interior, and front-seat riders began to enter and exit through the side door rather than climbing over those high wheel arches.

By 1961, the 1200 engine had 40 horsepower and VW had some competition. Ford introduced the Econoline, a compact van based on the Falcon platform, and Chevrolet used its air-cooled rear-engine Corvair as the basis for the Greenbrier Sports Wagon.

Car Life magazine compared the VW to these newcomers in its September 1961 issue. It said the VW Station Wagon had far superior build quality than the others inside and out. The VW had better overall handling, too, though it and the Greenbrier, which used a similar swing-axle rear suspension, suffered directional instability in crosswinds.

Skylight windows and rollback sunroof were among the most alluring features of early Volkswagen Bus passenger models.
© Vince Manocchi

No rival had more-efficient fresh-air ventilation, but the editors noted that the VW's heating system was "virtually ineffectual. Hot air from the engine cooling fan must travel through long, uninsulated ducts before reaching the driver."

The Transporter averaged 20 mpg, about three mpg more than the others and nearly double the average of full-size automobile station wagons of the day.

The editors did not list a 0-60 mph time for the VW because it would go no faster than 59 mph for them.

VW built the one-millionth Type 2 Volkswagen Bus during 1962. Changes in specification were slow, but for 1963, VW installed the 1500-series engine, which at its most powerful, made 53 horsepower at 4200 rpm in the bus.

For 1967, a dual-circuit braking system was introduced in which front and rear brakes were independently pressurized in case either hydraulic circuit failed. As production approached two million in 1967, VW had a redesigned station wagon ready.

The new 1968 model was obviously a lineal descendent of the original, but also was clearly a more-modern design.

Learn about the second-generation Volkswagen Bus beginning on the next page.

This is a 1967 base passenger version of the Volkswagen Bus. Called the Kombi model, it cost $2,150 and had 53 horsepower.
© Vince Manocchi