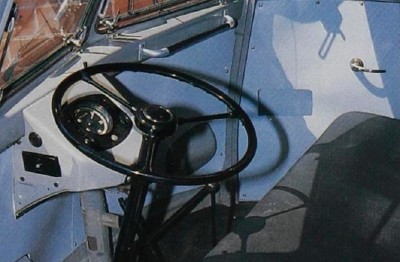 A simple layout and a steering-wheel angle that was, well, bus like, greeted early Volkswagen Bus drivers.
© Volkswagen of America, Inc.

Driving the 1950-1959 Volkswagen Bus was a new and unique experience, especially Americans unaccustomed to highly space-efficient and severely underpowered vehicles.

Tom McCahill, dean of American automotive journalists, tested a Kombi for the January 1955 issue of Mechanix Illustrated. "Uncle Tom" was astonished at its spaciousness. "It is as versatile as a steamship con man and twice as useful," he wrote.

McCahill rationalized the Kombi's sloth like acceleration by explaining that it was a vehicle born and bred in Europe, where drivers presumably were accustomed to taking most of a day to drive up a mountain road. "It will climb anything but not fast," he said. "When the grade gets real grim the Kombi speed is not much better than a fast walk but it will get there."

Indeed, Road & Track clocked its 1956 Micro Bus at a sleep-inducing 75 seconds 0-60 mph. That in fact was the test vehicle's top speed, and it actually took less time, 27 seconds, to cover a standing-start quarter-mile.

Curiously, VW placed a sticker on the dashboard that read, "The allowable top speed of this vehicle is 50 miles per hour," though R&T noted that with a tailwind, a Micro Bus was perfectly capable of cruising at 70 mph on a level highway.

"The Micro Bus is very easy to drive, has wonderful visibility and easy steering requiring only 3.5 turns lock to lock for a 39-foot turning circle," R&T said. A tall center of gravity kept cornering speeds to a minimum, so "handling" wasn't much of an issue.

The bus like driving position was deemed comfortable. Ride quality was firm for occupants of the front seat, which was directly above the front axle, but better in the other seats.

Early VW Buses, like this 1951 delivery model, were good on bad roads because traction was enhanced by low gearing and weight over the rear wheels.
© Vince Manocchi

From the start, Transporter campers were recognized as the unique vehicles they were. No other manufacturer offered such a versatile package as part of its regular lineup. Germany's Westfalia Werke did the majority of the factory conversions, with such companies as Dormobile, Devon, and Danbury performing aftermarket work as well.

Motor Trend recognized these special properties as early as October 1956, when it tested a "Volkswagen Kamper." It wrote: "More a way of life than just another car, the VW bus, when completely equipped with the ingenious German-made Kamper kit, can open up new vistas of freedom (or escape) from a humdrum life."

So popular was the Volkswagen Bus -- demand was outstripping production two to one -- that in 1956, VW opened a new factory in Hanover to built it.

Go to the next page to find out what changes VW would make to its popular Transporter.