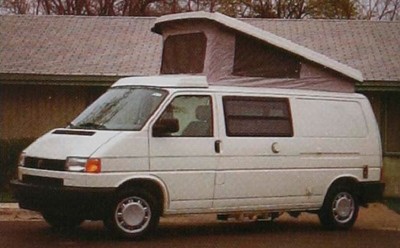 With demand low, VW of America offered just a camper version of the Volkswagen Bus for 1995. It was a Winnebago conversion of a long-wheelbase European model.
© Volkswagen of America, Inc.

The 1995-2003 Volkswagen Bus story was an on-again, off-again affair, and it effectively ended the Volkswagen Bus's European connection.

VW didn't even offer a EuroVan at all in the U.S. for 1995, though buyers could order a version of the 130.7-inch wheelbase Camper. A small number of these campers were built with the help of the U.S. firm, Winnebago Industries Inc. of Forest City, Iowa.

The $30,000 Camper, which included sleeping accommodations for four, plus the usual cooking and storage equipment, was sold through an even smaller number of Volkswagen dealers who had signed up for this temporary venture. The camper was the only Volkswagen Bus available in the U.S. through 1998.

Again, VW was at a crossroads. It had produced the Sharan, a sleek front-wheel-drive minivan for Europe in cooperation with Ford. Ford's version was called the Galaxy. The significance of the Sharan for American buyers was that it could be had with VW's unique narrow-angle V-6 engine, an engine that provided the impetus for a revised and relaunched 1999 Volkswagen Bus.

Still badged the EuroVan, the 1999 Volkswagen Bus had slightly revised front-end styling and, with 140 horsepower, was the most-powerful Volkswagen Bus yet. The power came from VW's VR6, its first new engine since the 1970s.

The VR6 name was a combination of "V" and Reihe, the German word for an inline design. The engine came to the U.S. first in the 1993 Passat GLX sedan and wagon, where it was rated at 174 horsepower.

The VR6 was a unique powerplant that packed 2.8 liters of V-6 engine into the space of a 2.0-liter inline four-cylinder engine. It's cylinder banks were set at a 15-degree vee, rather than the conventional 60 or 90 degrees.

The narrow angle allowed use of a single cylinder head for both banks. There were two valves per cylinder and, despite the "DOHC" stamping on the engine cover, one overhead cam per cylinder bank.

The EuroVan used the VR6 to power a GLS passenger model, a recreation-oriented MV (Multi-Van), and the long-wheelbase Camper. While most minivan rivals now had sliding doors on both sides, the Volkswagen Bus persisted with a single, right-side sliding door.

The VR6 was a smooth runner, but the 1999 Volkswagen Bus still took about 12 seconds 0-60 mph; that compared with 8.9 seconds for a contemporary Toyota Sienna minivan with a conventional 3.0-liter V-6 of 194 horsepower. The Volkswagen Bus was expensive, too, with the GLS starting at around $30,000 and the Camper now around $35,000.

The VR6-powered Volkswagen Bus soldiered on through the 2003 model year, sales sinking consistently.

Even as sport-utility vehicles took over from minivans as the American family wagon of choice, the minivan market in the U.S. was still the world's largest, with sales steady at about 1 million units annually.

But starting in 2004, in a category of vehicle that it invented -- one in which it had stood alone, inspiring imitators and generating a cult following - Volkswagen was without an entry.

Find out on the next page what VW planned to do to re-enter the minivan market.

The last EuroVans were the most mainstream Volkswagen Buses ever, but high prices and slow sales doomed them, and U.S. imports were halted after the 2003 model year.
© Volkswagen of America, Inc.