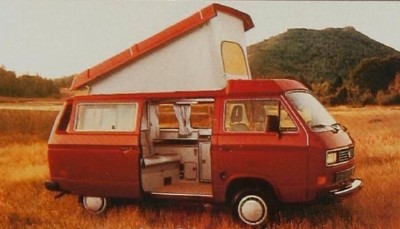 For 1986, all Volkswagen Buses got a 2.1-liter engine with 95 horsepower. Horizontal headlamps were new, too, as seen on this Camper model.
© Volkswagen of America, Inc.

The 1986-1991 Volkswagen Bus spanned a time during which VW thought more power and availability of all-wheel-drive might entice buyers back to its people-mover fold. The new features pleased Volkswagen Bus loyalists, but didn't hold much appeal to those for whom minivan now meant the Dodge Caravan and Plymouth Voyager.

The 1986 Volkswagen Bus, still marketed as the VW Vanagon, debuted both a larger engine and high-tech traction-enhancing all-wheel drive option.

A new grille with rectangular headlamps dressed up the nose of the1986 Volkswagen Bus, and power windows, central locking, and heated power mirrors were new options.

The 1986 Volkswagen Bus Vanagon Syncro model was the first all-wheel-drive passenger van sold in the U.S. It was available as a passenger model or a Camper. Its all-wheel-drive system was less-complicated than the center-differential setup VW was offering in Europe on its Quattro passenger car.

Under normal driving conditions, the Syncro sent 95 percent of the engine's power through the rear wheels. But power was fed to the front wheels whenever the speed differential between the front and rear wheels exceeded six percent, meaning rear-wheel traction was being lost.

By 1989, when this plush $19,000 Wolfsburg Limited Edition was offered, Vanagon sales were suffering at the hands of the car-based Chrysler and Dodge minivans.
© Volkswagen of America, Inc.

The speed differential acted upon a gooey silicon fluid trapped in a viscous coupling integrated into the front-axle differential. Interconnected plates within the case were engaged by the fluid action and in turn transferred power to the front axles.

The amount of power transferred depended on road conditions and was infinitely variable, continuous, and undetectable by the driver. For maximum traction, an optional locking rear differential could be engaged via a dashboard knob.

Syncro models rode 1.2 inches higher than rear-wheel-drive Vanagons, had about one additional inch of suspension travel, and rode on 205/70R14 tires, two sizes wider than on regular Vanagons. Syncro models were available only with manual transmission, but they got a "creeper" 6.0:1 low gear, for five forward speeds.

VW fitted Syncro models with an 18.4-gallon fuel tank, but mounted it in back, nestled around the gearbox. The spare tire also moved to a new aft location.

The Syncro was marketed not as a off-road vehicle but an all-weather van. VW demonstrated the system's mechanical reliability by driving a Vanagon Syncro around the world, covering 27,000 miles in a record 131 days in conditions that ranged from minus 20 degrees Fahrenheit in Canada to a roasting 123 degrees in Australia.

Though Syncro hardware, which included a front skid plate, added 330 pounds to the 3,270-pound Vanagon or 3,670-pound Camper, it did not seriously affect acceleration.

Car and Driver tested a Camper Syncro, which tipped the scales at 4,000 pounds, and recorded a respectable 0-60 mph time of 18.3 seconds. The feature wasn't cheap, however, adding $2,175 to the cost of a Volkswagen Bus.

Syncros accounted for only small fraction of Vanagon sales, which continued to shrink in the U.S. The Vanagon was doing well in other markets and each day, the Hanover factory turned out nearly 500 of all types to satisfy worldwide demand.

The 1986-1991 Volkswagen Bus still appealed for  features like this friendly seating arrangement. And the 1986 Syncro model was the first all-wheel-drive passenger van.
© Volkswagen of America, Inc.

In 1986, VW built its six-millionth Volkswagen Bus. In the U.S. that year, Vanagon sales sunk to 12,669. It was a slide that seemed to have no end, as you'll discover on the next page.

As the Vanagon played out its string, VW gave it some minor exterior styling changes and introduced plush Wolfsburg and Carat editions. It even briefly offered an inline four-cylinder 1.6-liter diesel engine, but with only 48 horsepower, it wasn't popular.

Once again VW needed something new to get back in the van game. This time, mere powertrain alterations wouldn't do. Find out on the next page about the redesigned, and renamed, 1993 Volkswagen Bus.