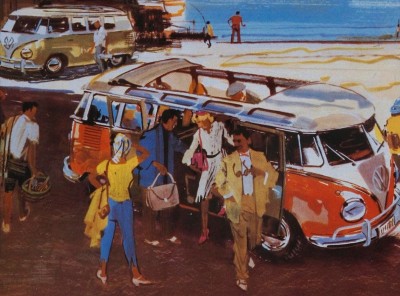 The first Volkswagen Bus, seen here in an early brochure, debuted in 1950 and was called the Transporter, or VW Type 2.
© Volkswagen of America, Inc.

And much like the beloved Beetle, the Volkswagen Bus came to symbolize liberty and unconventionality for a whole generation of Americans.

Variously called the Transporter, Station Wagon, Kombi, and Micro Bus, later the Vanagon and EuroVan, this picture-paced article covers ever version of the Volkswagen Bus, and even looks ahead to the vehicle's future.

So strong was the original 1950 design that it survived until 1967, and by the time Chrysler launched its Dodge Caravan and Plymouth Voyager in 1984, the VW Bus was already into its third generation.

Despite its steady success over the years, the 1990s and 2000s were not kind to the Volkswagen Bus. VW offered it in camper form only through much of the 1990s, and when it brought it back with more power than ever, that version lasted only from 1999 through 2003.

Even the very cool, German-engineered retro Microbus concept that raised hopes in 2001 was shelved. However, the Volkswagen Bus appears on track to return in 2008 using the underpinnings of the latest Chrysler Town & Country and Dodge Grand Caravan minivans, but with a VW-designed body and interior.

The inaugural Volkswagen Bus was officially called the Transporter or VW Type 2 -- the VW Beetle being the Type 1. The Type 2 was born of VW chief Heinz Nordhoff's growing confidence in the still-young Volkswagen enterprise, which traced its origins to 1930s Nazi Germany, but really didn't begin volume production of customer cars - all Beetle sedans -- until 1947.

Introduction of the convertible version of the Beetle in 1949 showed that Nordoff was amenable to carefully considered variations on VW's one-note Beetle sedan theme. By 1950, Nordhoff had determined that the Volkswagen was healthy enough to support a second model range, and that was the Volkswagen Bus.

The genesis of the Volkswagen Bus was instead a 1947 pencil sketch by Ben Pon, the importer who introduced the Beetle to the U.S. in 1949.

Numerous commercial versions of the Beetle had already been built, typically by entrepreneurs who cut, chopped, and added to the little Bug to produce a variety of open-bed and station wagon-type delivery vans.

The earliest Volkswagen Buses won renown as both passenger models and as slow but handy utility vehicles such as this.
© Vince Manocchi

The Type 2, however, was a purpose-built factory design and there was nothing like it on the automotive landscape. Other manufacturers offered various commercial vans, mostly tall bread-truck-like delivery vehicles, but no other maker thought to scale down the design to suit passenger duty.

Go to the next page to learn more about the design of the very first Volkswagen Bus.