How the Veritas RS III Hybrid Will Work 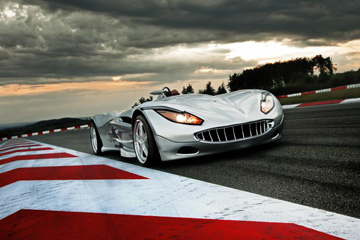 The days of gas-guzzling supercars like the Lamborghini Murcielago may be coming to a close. As miles per gallon climb higher across the board and emissions drop, exotic car manufacturers are following suit -- even the very small companies. For example, take what promises to be the fastest plug-in hybrid car on the planet: the Veritas RS III Hybrid.

It'll have a gasoline-powered engine and an electric motor that work together to produce more than 600 horsepower total. The Veritas RS III Hybrid can be plugged in to charge the battery, and it'll be able to cruise around town on electric power only. It'll also have much lower emissions than most supercars -- and most of the more widely available cars on the road today, too.

Vermot hand-builds the Veritas cars in a facility at the famed Nurburgring race track. The production run of the RS III Roadster was limited by Vermot to only 30 cars; the hybrid will be even more rare. The hybrid shown at the Geneva 2010 Motor Show was a prototype, and only three fully functional examples will be built for sale. The company is using its hybrid model as a step toward the future, to show that it's capable of engineering advanced automotive technologies.

But advanced technology and hand-built craftsmanship don't come cheap, of course. The Veritas RS III Hybrid will cost around 465,000 euros -- that's about $650,000 in the United States, at the current exchange rate.

Up next, a closer look at some of that bleeding-edge technology. 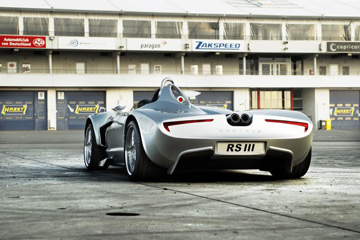 Power going to all four wheels makes the RS III Hybrid an all-wheel-drive sports car, like several current Lamborghinis and even the brand-new Ferrari FF.
Courtesy of Vermot AG

The Veritas RS III Hybrid goes beyond most of the hybrids on the road today, incorporating a full-hybrid system with a bank of lithium-ion batteries that can be charged by plugging the car into an outlet.

Most of the car's power comes from a BMW V-10 engine that makes 507 horsepower. It sits right behind the driver and powers the car's rear wheels. It's the same engine that gives the BMW M5 its oomph. A 140 horsepower electric motor at the front axle powers the front wheels. Power going to all four wheels, albeit from two different sources, makes the RS III Hybrid an all-wheel-drive sports car, like several current Lamborghinis and even the brand-new Ferrari FF.

The Veritas RS III Hybrid uses a lithium-ion battery pack -- the same stuff that powers your cell phone and laptop. The roadster can travel about 30 miles (48.3 kilometers) on electric power alone at fairly low, around-town speeds. Any farther or faster, and the V-10 engine kicks in and the car operates as a full hybrid, sort of like a frighteningly fast Toyota Prius. Contrary to early reports, the three Veritas Hybrids will not have the charge-on-the-go, Formula 1-style, Kinetic Energy Recovery System (KERS) system; Vermot AG says it's too heavy and expensive for a car like this.

All told, the hybrid bits add about 500 pounds (226.8 kilograms) to the total weight of the car. But, with its high-tech carbon fiber and Kevlar body, the Veritas RS III Hybrid still only weighs 2,821 pounds (1,280 kilograms), not including the gas in the tank or a driver. Keeping the weight down and the horsepower up means the hybrid can still go well past 200 miles per hour (321.9 kilometers per hour) -- though it's still a tad slower than the gasoline-powered Roadster.

But the hybrid makes up for that off the line. Like all electric-powered vehicles, there's a lot of torque available from the motor as soon as you press on the accelerator, plus there's that 507 horsepower, V-10 engine, too. The hybrid shaves a tenth of a second off the Roadster's 0 to 62 miles per hour (100 kilometers per hour) time, at 3.1 seconds. That's exactly as quick as the monstrously fast Koenigsegg CCXR.

There's not a lot of competition in the plug-in hybrid supercar category so far, but there is some. Next, let's take a look at who else has a horse in this race, and what the future holds for the Veritas. 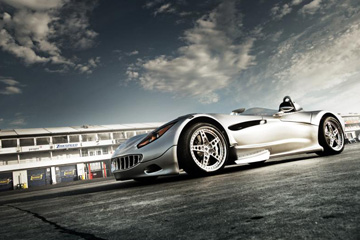 Keeping the weight down and the horsepower up means the Veritas RS III Hybrid can go well past 200 miles per hour.
Courtesy of Vermot AG

The most immediate competitor for the Veritas RS III Hybrid is the Porsche 918 Hybrid, which will be available for sale in September 2013. It's got a 400 horsepower V-8 gasoline-powered engine plus two -- count 'em, two -- electric motors, one on each axle. Porsche is claiming their plug-in hybrid will have the same 0 to 60-mile per hour (96.6-kilometer per hour) time, 3.1 seconds, and a top speed just shy of 200 miles per hour (321.9 kilometers per hour). It remains to be seen if the real-world versions of these cars can live up to (or surpass) these early estimates. One thing we do know about the Porsche 918 Hybrid: it'll cost a whopping $845,000 in the United States.

At the other end of the plug-in hybrid sports car spectrum is the Fisker Karma, which will be available in the summer of 2011. It's got a 260 horsepower gasoline engine, and, like the Porsche, one electric motor per axle. It's a little pokier than these other supercars, with a top speed of only 95 miles per hour (152.9 kilometers per hour) and a 0 to 60-mile per hour (96.6-kilometer per hour) time of 5.9 seconds, but it's a fraction of their prices, at just under $100,000.

Vermot AG isn't resting on its laurels with these two versions of the Veritas, either. It has scrapped plans to introduce a Coupe version of the gasoline-powered Roadster in favor of developing a luxury city car instead. After experimenting with the hybrid, Vermot will also produce an all-electric version in 2013. It's likely any Veritas RS III, no matter what technology is under the carbon/Kevlar skin, will be exclusive, stunning and fast. Very fast.