Browse the article Is Your Car Road-trip Ready? 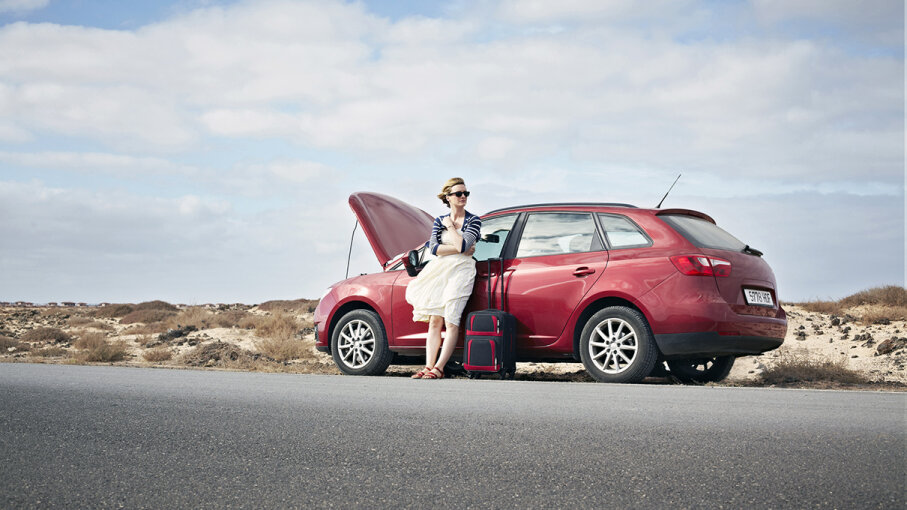 Don't end up stranded on your next road trip. Be sure your car is in tip top shape before you hit the highway. Liam Norris/Getty Images

Half the cars on the road today are more than 10 years old. Once your car hits that double digit mark, it is twice as likely to break down on the road and four times as likely to need a tow. These are among statistics released on April 17, 2018 by the American Automobile Association (AAA). They're the people many call when they get a flat tire or need a battery jump.

"It's no surprise that older vehicles are more likely to encounter a serious breakdown, but it is surprising just how many people are at risk," John Nielsen, AAA's managing director of Automotive Engineering and Repair, said in the April press release.

But aside from helping stranded motorists, AAA also gathers and reports data — it received 32 million calls for roadside assistance in 2017 alone, and about 35 percent of those calls resulted in a tow, for instance. The most common issues? Battery problems, engine failure and tire damage.

So if you're one of the 56 million planning a trip by car this summer, it's worthwhile to have your mechanic give your car a once over — and focus on these three areas in particular — especially if you're driving a 2008 model or older.

The most common problem AAA dealt with in all of 2017 was the car battery. That includes issues related to electrical systems, such as starters and alternators. They represented 23 percent of scenarios requiring a tow, according to AAA. And the chances your car will run into these problems only goes up as your car gets older.

But you don't have to become another statistic. Most batteries won't warn you they're on the way out, so inspecting and testing it before you hit the road is your best bet. AAA members can have their batteries and electrical system checked for free to see if it's at full strength or needs replacing. Otherwise, you can have your battery tested by a mechanic or at an auto parts store.

Engine issues, particularly cooling system failures, were responsible for 11 percent of breakdowns for which AAA was called in 2017. Your car's cooling components, such as the radiator, thermostat, water pump and timing belt can also fail without warning. To be sure your car's engine is in proper working order, check underneath after your car is parked. If you see any fluid gathering on the ground — or you notice the sickly-sweet aroma that indicates a coolant leak — you should definitely get the leak fixed before it causes the cooling system to break down.

Finally, nobody wants to have a tire blowout while driving on vacation. But tire damage is the third most common reason AAA says it had to send its tow trucks to help out stranded vehicles in 2017. To avoid ending up with a flat — or worse — get into the habit of checking your tires on a regular basis, not just before a road trip. You can spot most tire problems long before they leave you stranded.

Look for cuts, abrasions and bulges in your tires, and learn how to check the tread depth and pressure. Finally, know before you leave if your car is equipped with a spare (many aren't these days), and practice changing it. You can't prevent all accidental flats or blowouts, but basic tire maintenance can help you reduce the chance of getting stranded.

The bottom line? Being aware of the risks and knowing what to look for can help you avoid a ruined summer road trip.

Learn more about auto maintenance in "Auto Repair and Maintenance: Easy Lessons for Maintaining Your Car So It Lasts Longer (Idiot's Guides)" by Dave Stribling. HowStuffWorks picks related titles based on books we think you'll like. Should you choose to buy one, we'll receive a portion of the sale.

Now That's Interesting
If you and your car fit the statistics outlined in the AAA report, you might also be one of the 33 percent of drivers in the United States that would be unable to afford an unexpected or emergency car repair. According to AAA, an unexpected repair can generally cost between several hundred and several thousand dollars. Preventive maintenance isn't cheap, but it's more affordable and more convenient than an emergency repair away from home.