How light will cars be in the future?

Size and Safety of Lighter Cars 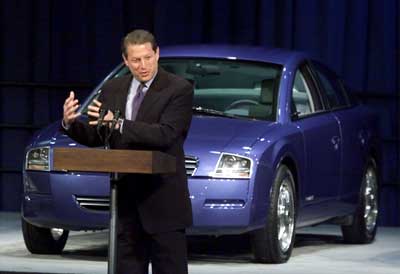 Former vice president Al Gore speaking at a Partnership for New Generation of Vehicles event. The initiative was started to get an 80-mile-per-gallon car on the road by 2003.
Mark Wilson/Getty Images

The average car uses only 15 percent of its energy to actually move the vehicle and drive [source: FuelEconomy.gov]. Most cars on the road today lose all but that sliver of power to braking, friction, idling and having to haul piles of accessories [source: Lovins]. By slightly altering the design, prioritizing function over luxury and using lighter materials, those issues can be minimized. In fact, according to the U.S. Department of Energy, every 10 percent of weight reduction translates to a 7 percent increase in fuel economy.

Thanks to that significant exchange, one of the goals outlined by the Partnership for a New Generation of Vehicles was to reduce the weight of cars by 40 percent, or around 1,200 pounds (554 kilograms). But when thinking about ultralight cars like these, it's important to differentiate between mass and weight. The mass, or size, of ultralight prototypes car companies have revealed aren't smaller than the average compact. Rather, the weight of the materials involved makes the difference.

Cars weigh so much because many of them are made from steel parts and sizeable engines. Ultralight future cars will be made of lightweight products including plastics, aluminum and metal composites and other hybrid materials. By adjusting the weight of the car parts, companies don't have to sacrifice size and can also use smaller engines.

But what about safety? If an ultralight car rams into the side of a building, won't it crumple like a ball of paper? Well, yes, it may crumble, but its impact absorption will protect the people inside. According to the State Department, "carbon-fiber composites can absorb 12 times the energy per kilogram as steel [source: Lovins]." Researchers at MIT also have discovered clay nanotech particles that could be used to make ultralight, yet ultra-strong auto parts [source: Bullis]. By adding these tiny particles to materials, it reinforces them and forms a strengthened network for incredible durability.

For Loremo, addressing safety concerns involved creating an entirely new type of car frame. While most cars are designed to distribute impact around the passenger, the Loremo passes it under them. It does so by using a longer chassis, the frame on which the car sits, that runs along the length of the car to spread the force impact linearly. The company compares it to the same effect as striking a nail [source: Boston]. When hit, the nail doesn't break because its impact is directed along its length rather than at an angle. Also, by keeping the body close to the ground and adding air shafts that funnel air through the bottom of the car, it adds driving stability in the same way as featherweight racecars [source: Boston].

When will consumers start to see these ultralight phenomena on the car lot? The Loremo goes into production in 2010, and depending on its reception, it could set off a domino effect. To learn more about future car technology, cruise on to the links below.