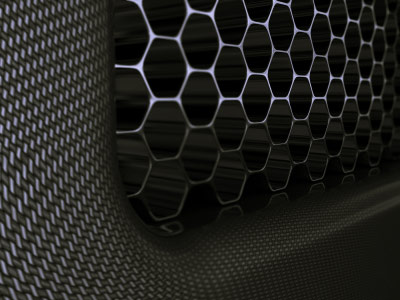 Carbon fiber was primarily used for race cars, but recently it's beginning to appear on production vehicles.
Kristian Stensoenes/iStockphoto

One of the reasons race cars are able to post such blistering track times is because they are so light. Of course, it's easy for a race team build a lightweight car when it doesn't need to haul more than one person or even have a full interior. But race car designers have utilized lightweight materials to help make their cars fast. Of course, it's not enough for the materials to be lightweight -- otherwise, race cars would all be made of paper. Race cars operate under extreme stress, so every material in them needs to be strong.

One of the most high-tech materials in race cars is carbon fiber. Formula One race car bodies are almost entirely made out of carbon fiber. Carbon fiber is extremely light and strong, and it's starting to appear (in small amounts) on production cars, mainly as decorative accessories. Because it's so light, carbon fiber could radically increase fuel economy in production cars. The problem: It's too expensive to use on most cars.

Aluminum is another lightweight, yet strong material that's often used in racecars, primarily for the engine block. Thanks to racing, aluminum engine blocks have been in production cars for some time now, but some automakers are beginning to use aluminum for select exterior body panels, too. In fact, aluminum hoods are becoming more common now than ever before. Since aluminum isn't as expensive as carbon fiber, aluminum components have been able to find their way onto production cars a little faster than the more expensive carbon fiber parts. Car manufacturers like aluminum because it lightens the car, which improves fuel economy, and doesn't take a toll on performance or durability.

What's the number 1 car racing technology that's made it into everyday cars? It's a safe bet that it's something you might not be expecting. Read on to find out what it is.