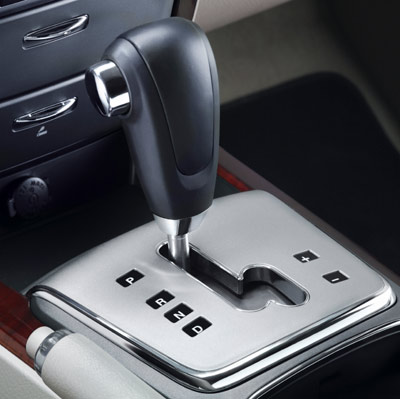 An automatic transmission with a manual mode allows the driver to shift gears without a clutch pedal.
Emre Ogan/iStockphoto

Most drivers in the United States use automatic transmissions, which makes cruising around town worlds apart from a hard-shifting lap on a Formula One track. But, the purpose of a transmission in a race car and a road car are the same: it translates the engine's power to the car's wheels. While an automatic transmission shifts gears with no input from the driver (other than the initial selection of Drive), a manual transmission lets the driver control the flow of power from the engine to the wheels. Race car drivers want the control of a manual transmission, but the manual process can be too slow and prone to human error.

Enter Direct-Shift Gearboxes (DSG) and clutchless manual transmissions. Both of these types of gearboxes are racing technology that allows drivers to shift gears quickly and make sure that they shift into the correct gear.

DSGs actually work like two transmissions: one dials in the odd numbered gears and one dials in the even numbered gears. Because there are two transmissions, the next needed gear is always "on deck" which makes the DSG faster than a manual transmission. DSGs also don't use a clutch pedal, which makes them faster than a conventional manual, and less prone to driver error. DSGs are a fun addition to road cars (right now they are mainly seen on sporty Audi and Volkswagen models) because they allow drivers the fun of a manual without the hassle of a clutch pedal.

Running late? Read on to see how car makers have taken racing technology that's meant to shave seconds off of lap times and used it to help you shave time off your trip to the grocery store.