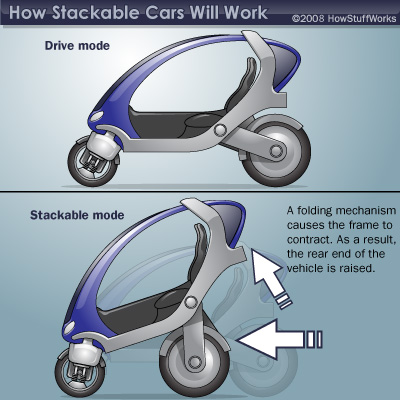 In designing the City Car, the MIT Media Lab Smart Cities group set out to create a vehicle that wasn't the continuation of old designs, but rather a drastic rethinking of what city residents need from an automobile.

For many, public transportation and private automobile usage have long been mutually exclusive choices. Car-sharing programs that allow multiple individuals to share short-term use of a vehicle have changed this. Say you wanted to travel to a destination a few miles from the nearest train station. A car-sharing program would allow you to rent a vehicle at the station to complete your journey.

Existing car-sharing programs allow members to borrow a vehicle, use it, and then return it to its original location. Bicycle-sharing programs, however, typically allow residents to obtain a bicycle from one location, ride it to their destination, and leave the bike at a nearby drop-off point. The City Car design follows this second model, setting out to create a vehicle that can be checked out at one location (ideally near public transportation stations and major attractions) and returned at another. The vehicles wouldn't replace busses and trains, just fill in their geographic and logistic gaps.

A user would check a City Car out from the front of a rack, travel to his or her destination, and drop the vehicle off at the back of another City Car rack.
Franco Vairani/MIT Smart Cities group

Currently, designs call for the City Car's lightweight body to boast a folding axis and a simple pivoting mechanism to fold the vehicle into a vertical position. The lightweight cars would weigh about 1,000 to 1,200 pounds (454 to 544 kilograms) [source: Lombardi]. The vehicle could then be locked into place directly behind another City Car. These racks would be connected to the city's power grid, allowing stored cars to charge their lithium-ion batteries. Ideally, a vehicle would be fully charged by the time it cycles through to the front of the stack.

The City Car's frame is designed to fold in the middle, effectively cutting its already short length in half.­
Franco Vairani/MIT Smart Cities group

But where does the engine go? Amazingly, the design calls for the car's body to house only computer systems and a power source. The City Car's motor, suspension and even its steering are all located within its high-tech wheels.