Pros and Cons of Adhesives 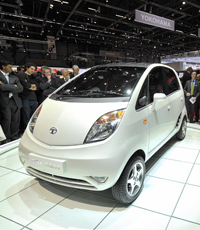 Using adhesives has some major advantages over other fastening methods. An adhesive distributes loads better than a spot weld or a rivet. Imagine two body panels that are attached with a few spot welds. Every time the car hits a bump, the force of the bump travels through the car. When it passes across those two body panels, the spot welds carry all the force. This leads to stress fractures in the area near the welds. An adhesive would allow the panels to be attached across a wider surface area, distributing the force in a more efficient manner. A good seam weld would accomplish the same thing, except welds are so rigid they don't transfer force very well. Adhesives, especially polyurethane epoxies, have the ability to flex and absorb some of the force, and transmit the rest of it evenly across the surface area. This is one of the reasons airplane manufacturers have been using adhesives for years.

Adhesives also allow for the use of lighter structural materials. Welds and bolts require thick, heavy steel pieces to anchor them. With an adhesive, thinner-grade steel can be used, or the manufacturer can switch to alternate materials such as aluminum or carbon composites. These materials can't be welded the way steel can, so adhesives are often the best option. Indian automaker Tata reduced the weight of their ultra compact Nano in part by using adhesives to attach certain body panels.

Temperature does affect adhesives, but the epoxies used to assemble cars don't melt until they are heated to 400 degrees Fahrenheit (204.4 degrees Celsius) or more, and they don't crack until they are cooled to minus 40 degrees Fahrenheit (minus 40 degrees Celsius). Obviously, these are extreme temperature variances that most people would never encounter in their lifetime. For the average driver, temperature is no worry.

That's not to say that adhesives are without their flaws. The auto industry doesn't have a lot of long-term data on the use of adhesives, and some question their ability to stand up to 10 or 20 years of use. Structural adhesives have been used by European manufacturers for several years, so confidence is growing in adhesives' longevity.

There is one potential negative side effect of adhesive use -- more expensive repairs. If an adhesive-bonded structural part breaks, most repair shops will not have the facilities necessary to rebond the adhesive. Instead, they would have to use a pre-bonded component sent by the manufacturer, possibly forcing the car's owner to pay for more than just the broken part. A good body shop can handle a cosmetic repair by cutting away the damaged section and patching in a new part with adhesives specifically designed for this purpose.

While adhesives are gaining wider use ­today, their use in auto assembly is not really new. Car windshields have been held in place by polyurethane epoxies for decades, and in the last ten years or so, manufacturers such as Saturn and even BMW have attached plastic cladding to their cars with adhesives instead of bolts or welds. As auto designers explore new technologies and new materials, we may see the use of adhesives skyrocket in the next few years. Even so, there will probably always be a place on the assembly line for a welder.